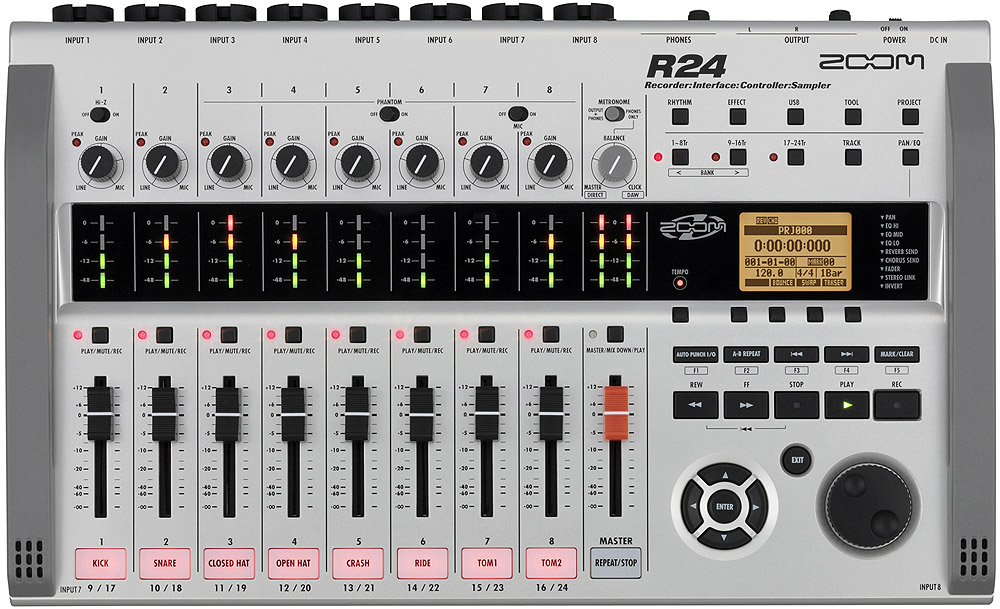 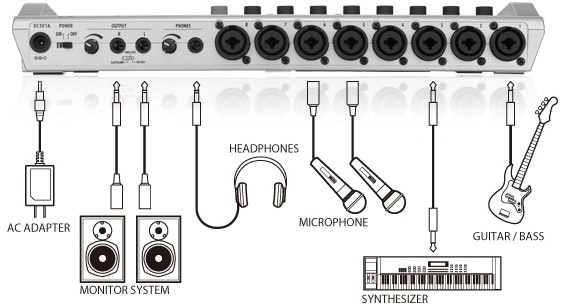 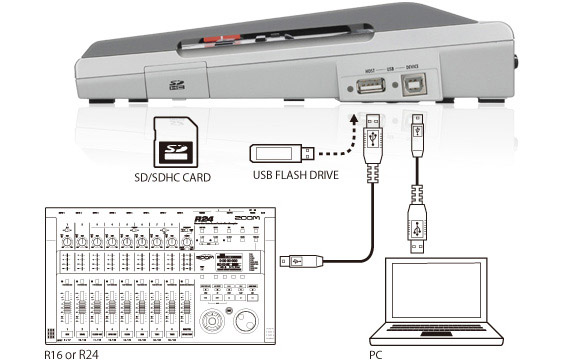 Zoom takes its revolutionary R16 and turbocharges it with a sampler and drum machine, 8 additional recording tracks and 6 channels of phantom-power on the all-new R24. The R24 combines four production tools into one incredibly versatile device. In addition to 24-track playback and 8-track simultaneous recording using SD memory cards, the R24 is a digital multi-track recorder, an audio interface, a control surface and a pad sampler.

The R24's new sampler function consists of 24 built-in voices that can be triggered using 8 pads and 3 bank keys to assign sounds to each track and create loops. Also, you can use the unit's drum machine and its 400 rhythm patterns to create original backing beats, or simply output a metronome for tempo control. More than ever before, you have all the tools necessary to create studio-quality recordings anywhere.

For recording, the R24 supports up to 32GB SD cards, allowing over 100 track hours of recording. The flexibility of SD recording not only makes the R24 lighter and more portable, it also ensures increased reliability with no concern for a crashing hard drive. Back up your project on a USB memory stick. Or dedicate an SD card to each recording session.

Take your R24 into your studio and record additional tracks using its USB audio interface. Then when you're ready to mix, use the R24's control surface capabilities to manage each function of your favorite DAW software.

Incorporate any of the 100+ built-in studio effects to enhance your recording and use the pro-quality mastering effects to complete that studio sound. You can even connect two R24s via USB for synchronized operation and 16 tracks of simultaneous recording.

With the new Zoom R24, versatility, control and comprehensive features come together in a single device that puts everything you need for professional music production right at your fingertips.

The R24 is perfect for capturing audio in a variety of settings. It supplies up to 6 channels with 48V/24V phantom power, so you can record with a variety of condenser microphones on vocals, pianos, guitars or drums. You can record up to 8 tracks simultaneously and playback up to 24 tracks in either 16-bit/44.1kHz or 24-bit/48kHz WAV format. So you have enough tracks and power to record everything from complete drum kits to live music performances of bands and orchestras. You can even produce audio and sound effects for film or video.

On its side panels, the R24 also features two built-in stereo condenser microphones for field recording or quick, convenient "sketch-pad" ideas and rehearsals. Use the 8 combination XLR-1/4-inch inputs along with one Hi-Z input for direct connection with a guitar or bass. When your masterwork is ready, you can use over 100 built-in studio effects to enhance your tracks and use the pro-quality mastering effects to complete that studio sound.

The R24 is more than a multi-track recorder. It's also a powerful workstation when using USB power for studio operation. Connect the R24 to your laptop or desktop computer via USB, launch your favorite DAW or use the included Cubase LE 5, and start laying down your production tracks. With simultaneous 8-in/2-out capability, you can record 16-bit/44.1kHz audio or capture high-definition 24-bit/96kHz audio via 2-in/2-out configuration. If you use the sampling rate of 44.1kHz, the internal DSP effects of the R24 are also usable on your computer tracks. Also, a dedicated control lets you adjust the mixing balance between the DAW playback sound and the direct sound for monitoring.

Computers bring incredible control and power to the recording process, but they're not very intuitive when it comes to mixing, which makes your music come alive. So, when you're ready to mix, the R24 is right there with you. Through a simple USB connection, you can control the transport and mixing functions of major DAW applications such as Cubase, Logic, and Sonar from the R24. No more mixing with a mouse! The R24's innate mixing console feel and LED meter bridge makes mixing your tracks a pleasure.

And it's a Sampler.

In addition to assigning sounds to each track to create loops, the R24's sampler allows you to play the pads in real-time and creates performance data for a complete song by combining loops. By simply lining up drum loops from the included USB memory stick, anyone can easily create pro-quality backing parts and basic tracks. Recording on another track while playing loops is also possible, seamlessly blending the recorder and sampler functions. The rhythm feature can produce backing drum tracks in both real-time and step input, while the metronome settings support the output of a click track to headphones, perhaps to a drummer in a live situation, while the signals from the output jacks are sent to a mixer. 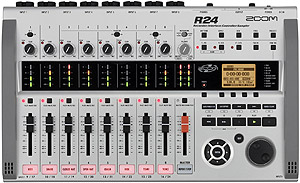