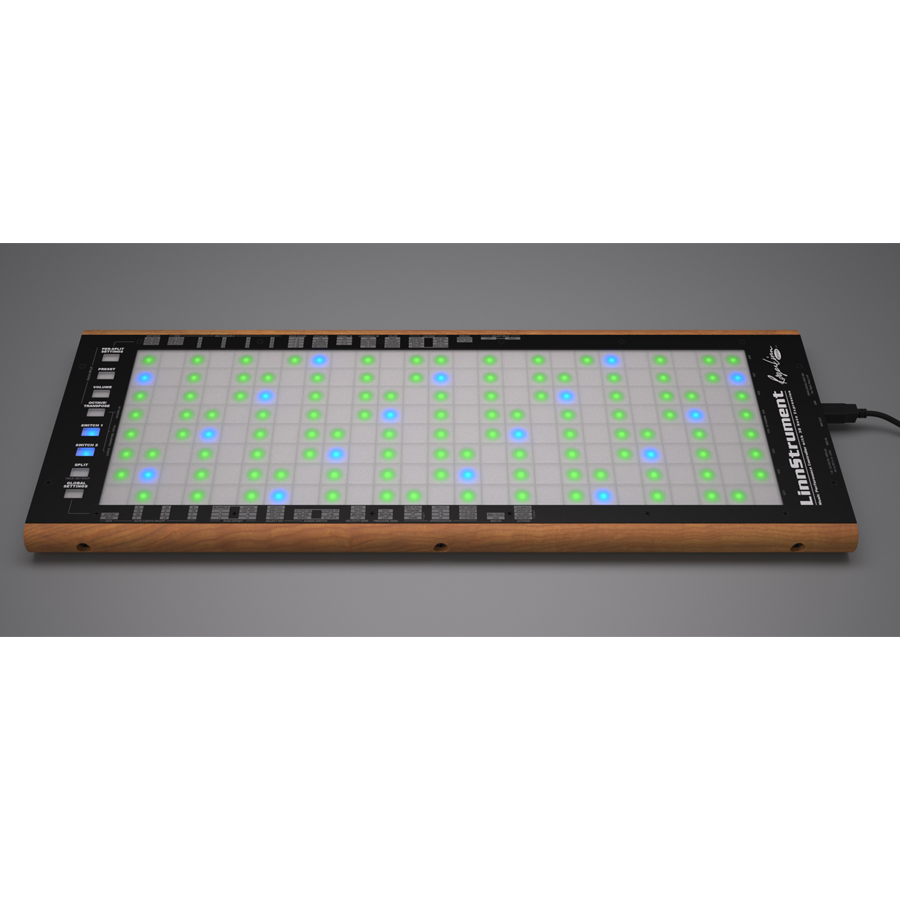 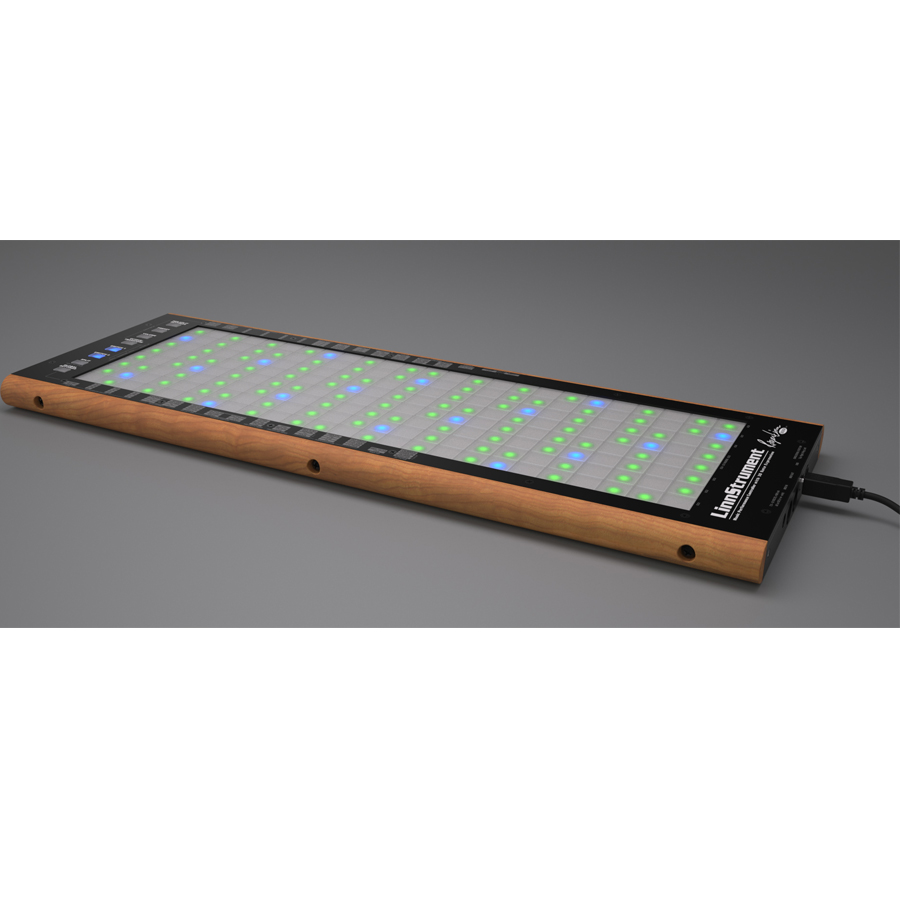 What is it?
In short, LinnStrument is an expressive alternative to the MIDI keyboard controller. It does not generate any sounds but rather sends standard MIDI messages over its MIDI or USB jacks to any MIDI sound generator or software. But that's where the similarity ends. Unlike a MIDI keyboard's simple on/off switches, LinnStrument's patent-pending multi-touch technology captures three dimensions of each finger's movement, polyphonically, for a far greater degree of musical expression than can be achieved on a MIDI keyboard. In addition to providing standard strike velocity, typically finger pressure (Z axis) is used to vary note loudness, finger left-right (X axis) movement is used to vary pitch, and finger forward-backward (Y axis) movement is used to vary timbre.

Note locations in 4ths tuning. Click to expand.
Also unlike a MIDI keyboard, LinnStrument's notes are arranged not as on a piano, but rather like any stringed instrument, with multiple rows (strings) consisting of 2 octaves of semitones each. The rows can be tuned as a guitar, in fifths as a violin or cello, in fourths (as shown in the picture at left), or any interval you like. To make it easy to find the right notes, the naturals (C, D, E, F, G, A and B) are lit, with all the C notes lit in a different color, though you can alternatively light any scale or accent notes you choose, and in any of six colors: red, green, blue, cyan, magenta or yellow.
With LinnStrument's 3-dimensional control, you'll find little use for envelope generators or LFOs because your finger movements do a better job of controlling a note's envelope, vibrato, pitch slides, tremolo, bends, timbral changes and other musical gestures, just like on acoustic instruments. All this adds up to an electronic instrument with expressive control approaching that of fine acoustic instruments, allowing you to develop subtle musical gestures and a personal playing style, just as great musicians have done in past on acoustic instruments.

Why is musical expression important?
If you believe your MIDI keyboard's on/off switches are a good human interface for performing music, try playing an authentic sax, violin, cello, clarinet, guitar, pedal steel or harmonica solo on it. The problem is that on/off switches aren't very good at doing much more than turning something on or off. Think about it. Current MIDI keyboards and controllers consist of little more than switches, knobs and sliders, elements designed for computer data entry, not music. Musicians today face a tough choice: embrace the technical advantages but poor expression of MIDI keyboards and controllers, or choose the excellent expression of an acoustic instrument but poor connectivity to the computer. We offer a third choice Switches, knobs and sliders are good for data entry but not so good for performing music.

Why a grid? Why not use a piano key layout?
The problem with a piano's note layout is that the notes aren't uniformly spaced or positioned, so sliding from one note to another requires a variety of cumbersome slide distances and directions depending on which notes you're sliding between. Had we used a piano note layout, performing a whole note bend (a common occurrence on guitar) would require one of four different movements depending on where you're bending to and from. And sliding up an octave from C to C would result in a series of uneven pitch jumps. And because some bends require a diagonal movement, changing the Y-axis position would also change the note's timbre.

Fortunately stringed instruments don't have these limitations because the notes on each string are uniformly spaced. Bending pitch from one note to another is a constant distance and direction regardless of where you're bending to or from. So we chose to arrange the notes as on any stringed instrument: multiple rows of evenly-spaced semitones, which happens to be a grid. There's no need for Bend or Mod wheels. If you want to bend a note from C to D, simply slide your finger from C to D then wiggle it for vibrato.
By the way, there's another advantage to the string/grid note arrangement: if you want to transpose a chord or scale to a different key, simply slide your hand left or right. Compare this to a piano keyboard, which requires that you learn a different chord or scale fingering for each of 12 musical keys.

Easy to play, easy to play in tune, sitting or standing
If you play guitar or any stringed instrument, it's surprisingly easy to transfer your skills to LinnStrument. If you play keyboard, it takes a little longer but you'll quickly appreciate the advantages for performing subtle pitch gestures in an intuitive way, easy transposition and spanning a 3-octave chord in one hand. Plus, at 22.5" by 8.5" by 1" thick, it's a whole lot more portable than a keyboard.

With continuous pitch control similar to a violin, you might expect that it would be just as difficult as a violin to play in tune. But LinnStrument's pitch quantize insures that your notes are in tune regardless of where your initial touch lands within each 3/4 inch note square, then it immediately removes the quantizing so as not to restrict your vibratos and pitch slides. It's like having frets when you want them and not when you don't.

You can play it at a table like a keyboard but at only 1 inch thin and 5 pounds, it's also small and light enough to play standing up, using the included guitar strap buttons. And it's fully USB bus powered, so only a single USB cable is needed onstage. You can even power it from any Lightning-equiped iPad or iPhone.

Sensor details. Works with any MIDI synth. Independent per-note pitch bends.
Technically, each of LinnStrument's rows is a continuous multi-touch sensor, capturing independent velocity, X, Y and Z-axis position for each of multiple touches. And all rows provide this capability simultaneously. On top of this sensor is a soft, translucent, 2 millimeter thick silicone rubber touch surface, with slightly raised note squares spaced 3/4 inches apart and high enough so you can feel where the notes are, but low enough to easily slide your finger left or right across multiple note squares for continuous pitch slides. Each note square has a 3-color LED that shines through to the surface, visually guiding you to the scale notes you seek.

Regarding MIDI, by default LinnStrument sends over a single MIDI channel, using Poly Aftertouch for independent per-note pressure, and X-axis pitch bends and Y-axis control change messages sent only from movements of the most recent touch. (This works within MIDI's limitation of bends and CCs applying to all notes on the channel.) This permits both polyphonic play and three-dimensional solo expression on a single channel, and works with any MIDI sound generator because it's sending the same messages as from any MIDI keyboard.

Open Source software
We realize that creative musicians will want to use LinnStrument in a variety of unexpected ways, so we're releasing the entire software as open source, enabling you to customize everything. It's based on the popular ARM-based Arduino Due Platform. To modify the code, simply download and install the free Arduino IDE, then download the LinnStrument source code from our repository, modify it and load it into your LinnStrument in order to use your new feature.

The Ultimate LED Grid Controller
While LinnStrument excels at playing notes, it's also incredible for controllerists. Imagine having access to 200 drums, samples, clips, loops, or sequences, and simultaneously controlling the volume, pitch and filter frequency--or any other parameters--merely by moving your finger around. And all the expected MIDI messages are there, including the ability to light the lights however you like from incoming MIDI messages.

Go Wireless
If a single USB cable is too constraining for you onstage, try the AirPower 3 Wireless MIDI/USB & Power System from Light and Sound Control Devices / Starr LABS. Attach it to the back of LinnStrument and connect it to its USB port for low-latency wireless transmision up to 250 feet from the matching receiver at your laptop or iOS device, as well as USB bus-power to your LinnStrument for 8 hours! 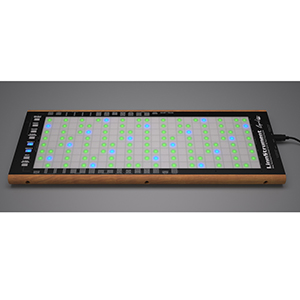