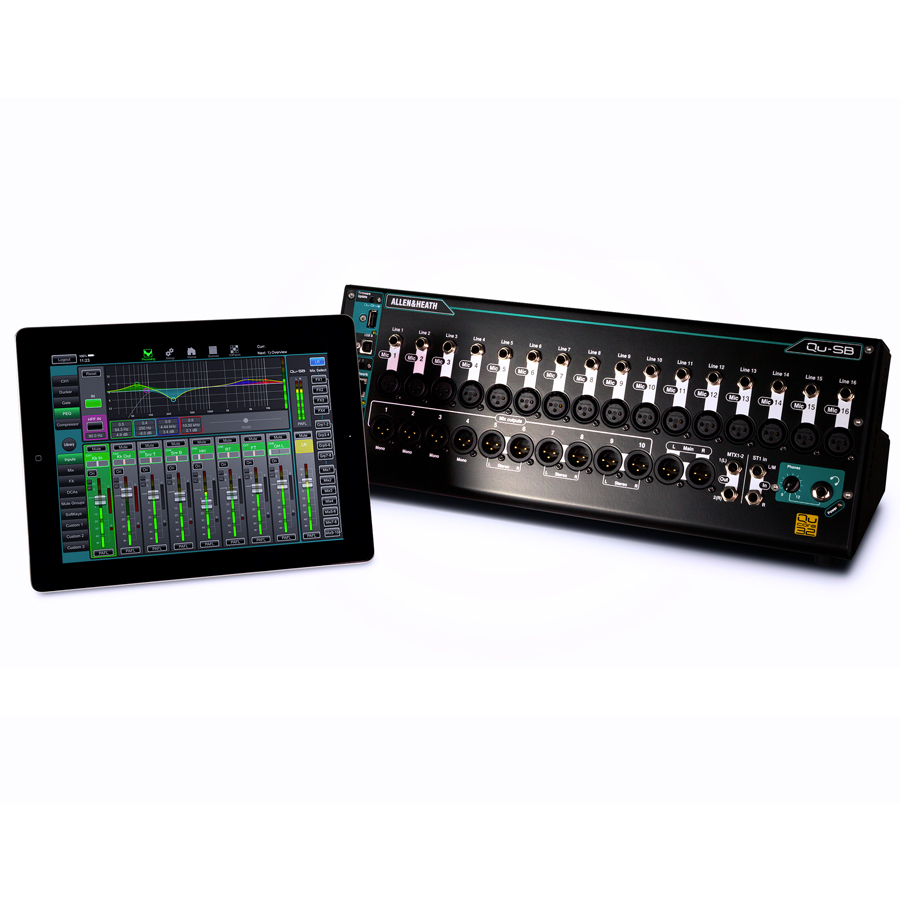 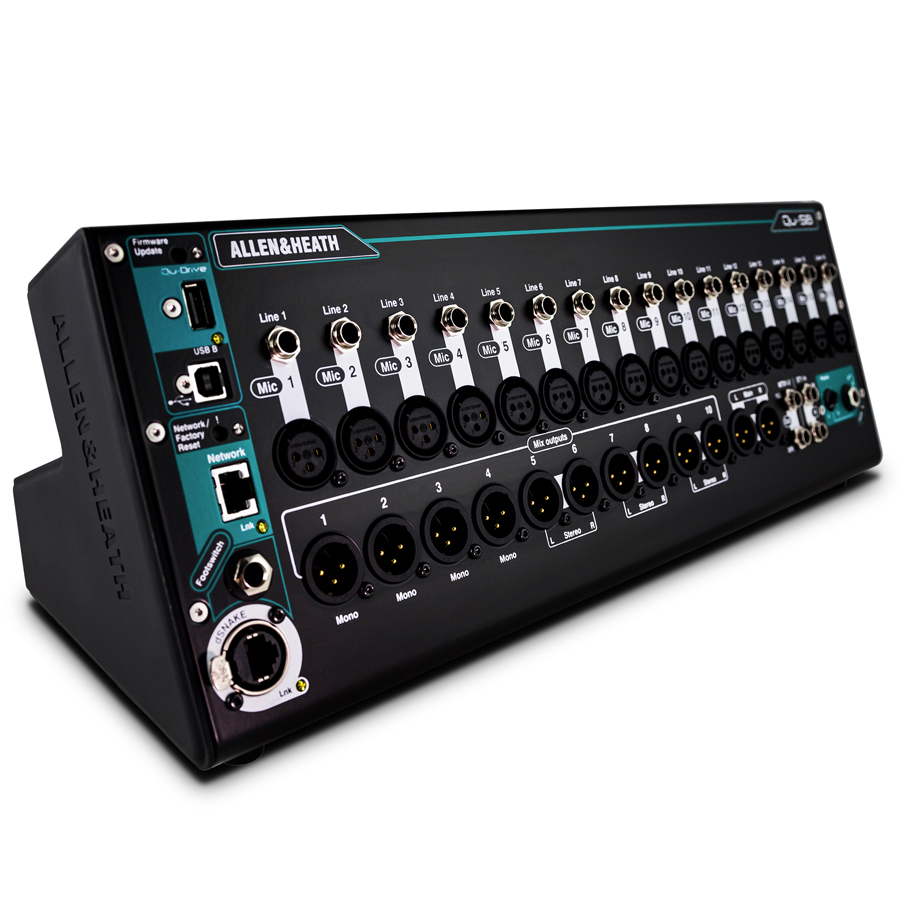 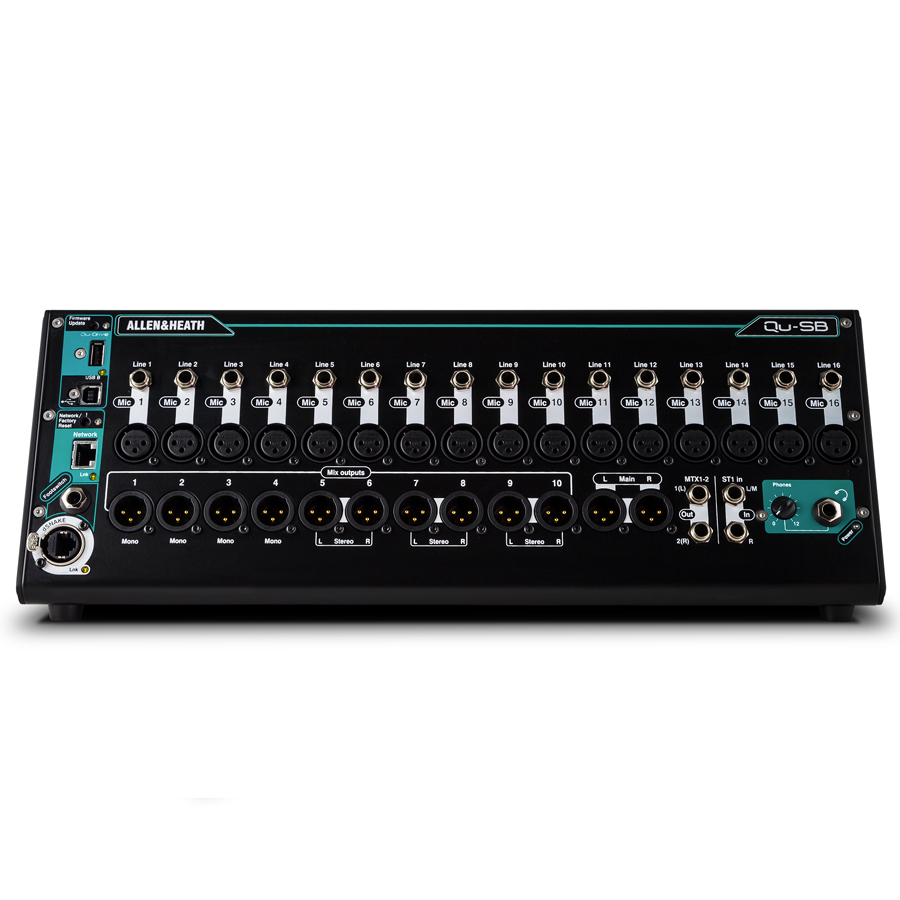 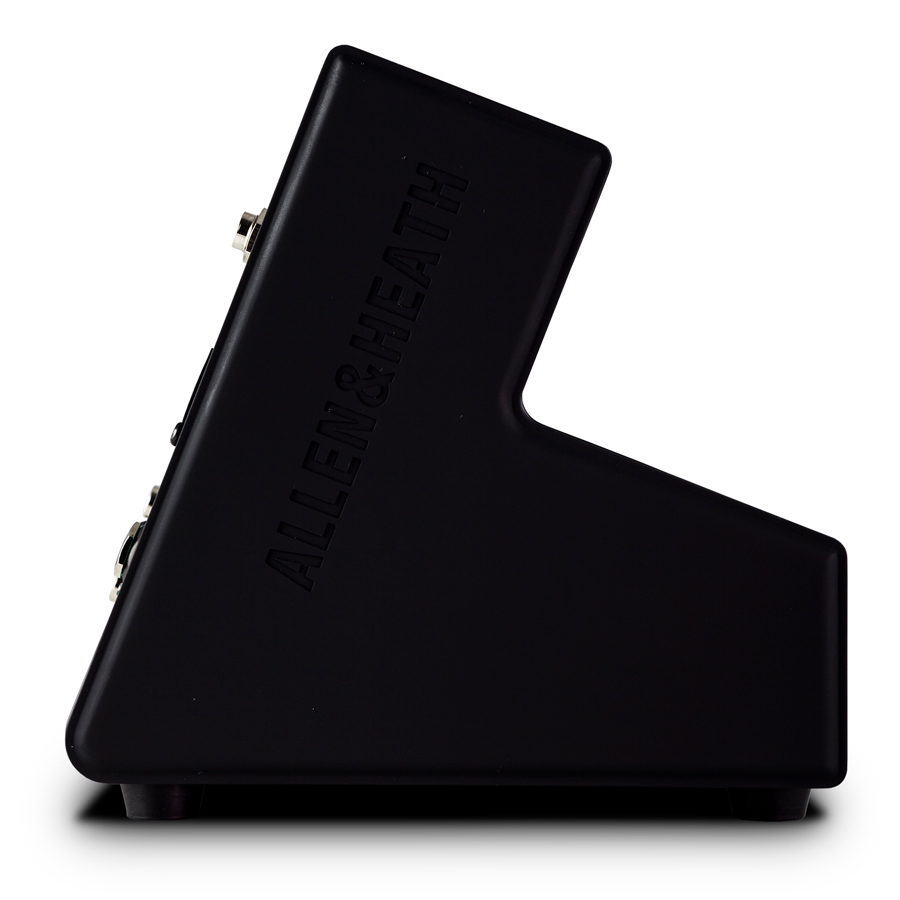 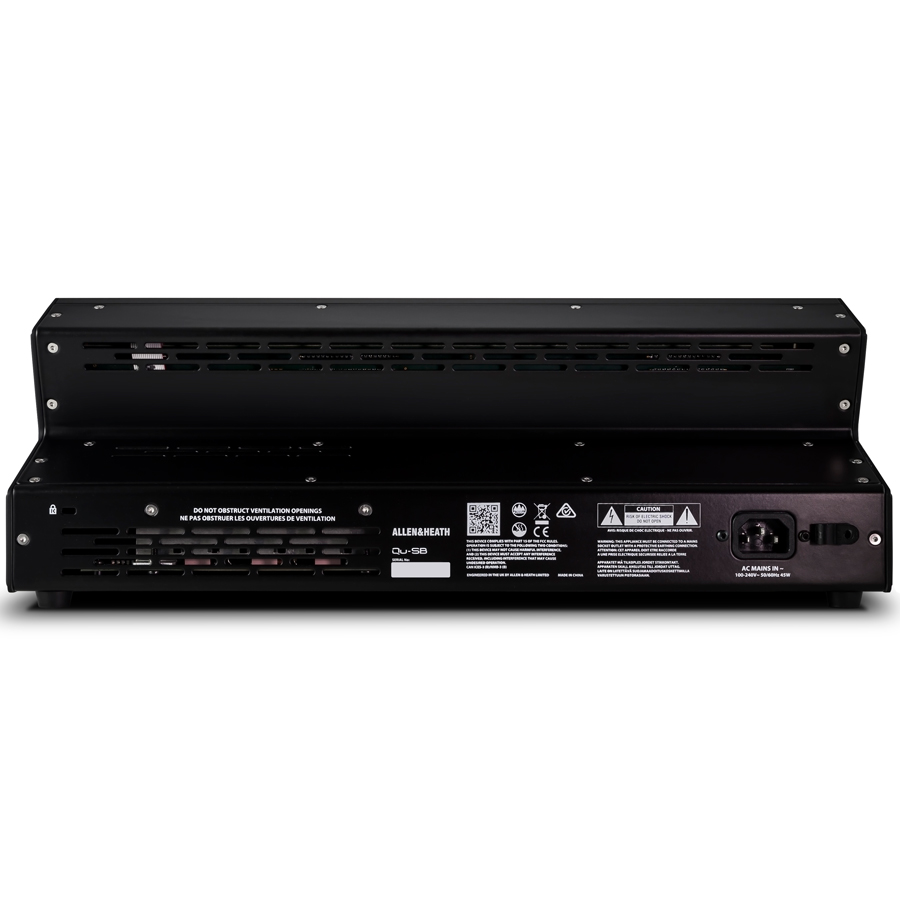 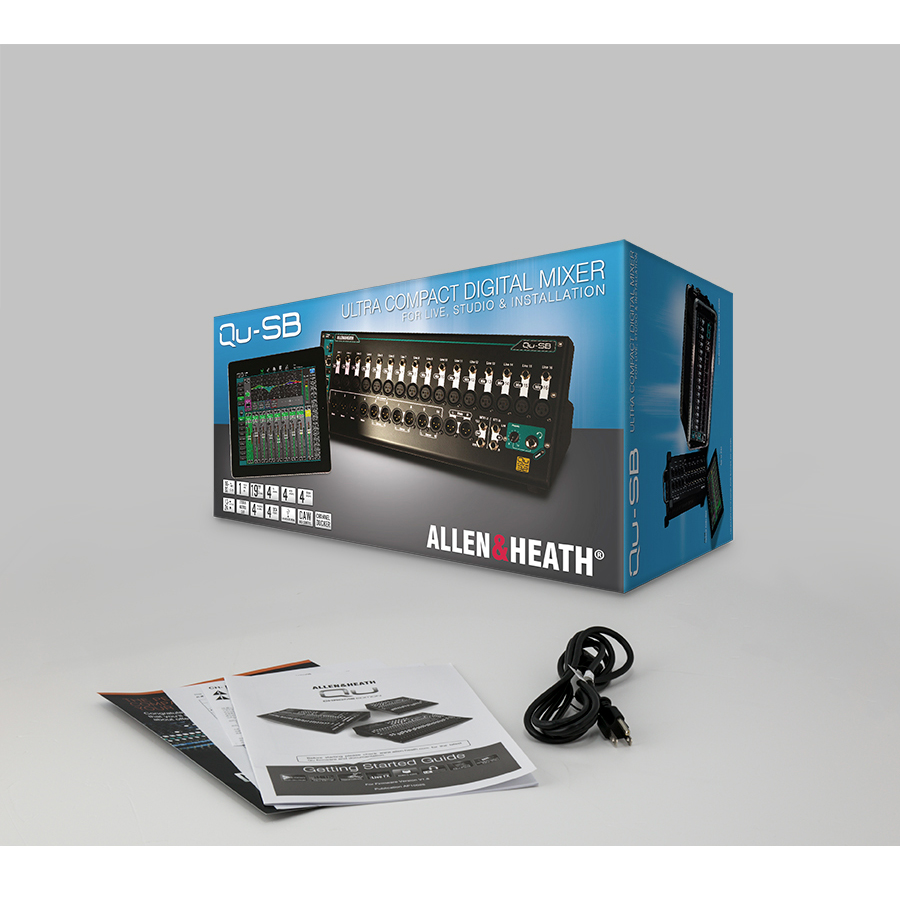 Qu-SB is an ultra-compact digital mixer which frees you to mix from anywhere in the venue and provides a smart, portable solution for performing bands and artists.

Qu-SB is portable enough to carry under one arm and comes loaded with our highly acclaimed suite of FX emulations and dynamics, making it a smart replacement for an old analogue mixer and a rack full of outboard FX.

The companion Qu-Pad app is a slick, intuitive interface for setting up the show and mixing live from your iPad, and there's also a customisable Qu-Control app that lets you choose just a few essential controls that you really need in front of you for easy access during the show.
Couple these with the Qu-You personal monitoring app for Android / iOS and Qu-SB is a fantastic choice if you're mixing your own monitors and want to get the same great sound wherever you play.

With all of your settings saved and ready, plus multi-track recording and playback of previous shows for virtual soundchecks, you'll be all set to play in record time.

On top of the 18 on board inputs and 14 outputs, Qu-SB has you future-proofed with plug n' play expansion up to 38 inputs / 24 outputs via a family of remote AudioRacks.

QU-SB MIXING APPS
Having massive processing power and advanced functionality is great, but it counts for nothing if you can't access the controls you need in a heartbeat.

Qu-Pad gives you instant access to all live mixing parameters and frees you to EQ and mix monitors on stage, roam around the venue whilst adjusting the PA, and mix the show from on-stage or the heart of the audience by connecting to the mixer over Wi-Fi More info.

Qu-You allows up to seven performers to control their own monitor mixes using any iOS or Android device, and frees up the engineer to focus on mixing for the audience. More info.

Qu-Control is a customisable iOS app providing a simple interface for non-technical users to control the essential parameters of Qu mixers when technical operators are not around. More info.

Qu Apps require the connection of a Wi-Fi router or access point to the mixer's Network port.

ANALOGIQTM PREAMPS
Qu-SB's sixteen AnalogiQTM total recall preamps feature zero crossing detection and an advanced padless 1dB step gain stage, closely allied to the DSP for optimal gain accuracy and audio transparency. The analogue signal is captured by high class, low latency 24bit analogue to digital converters matched to high quality 24bit digital to analogue converters to deliver the required outputs. The AnalogiQTM design has been refined over many months to offer superb transparency, minimal distortion and an ultra-low noise floor, with a warm, musical sound that is missing from some digital consoles.

PROFACTORY MIC PRESETS
Allen & Heath has teamed up with leading microphone manufacturers and top engineers at Audio-Technica, Sennheiser, and Shure to provide EQ Library presets for a large number of popular and industry standard microphones. Presets for vocals, electric guitar, acoustic guitar, drums, brass and woodwind have been painstakingly crafted to offer you the best possible starting point for the source and your microphone of choice. Whether you're a keen amateur or a seasoned professional, you can get to work quickly and easily, saving valuable time so you can concentrate on EQ'ing the source and room acoustics.

QU-DRIVE
Forget soundcard drivers and software setup, Qu has an integrated multitrack USB recorder, providing 18 channels of 48kHz, 24bit recording and playback straight to / from your USB hard drive. Capturing multitrack recordings of your shows has never been so easy. Mixes and FX returns can be recorded alongside channels, and multitrack audio can be played back to the mixer for virtual sound-checks.

An independent set of controls is provided for quick stereo recording of the main LR or other mix outputs, and a 2-track USB return can be routed to ST3 for playback of stereo WAV files such as walk-in music

USB AUDIO STREAMING
Qu's built-in interface streams multitrack audio to your Mac or PC via a flexible patching system: all Input channels and the Main LR can be recorded at the same time, or you may choose to record something different such as FX returns or a pair of mixes.

The returns from the computer can be assigned to the Input channels. The interface is class-compliant on Mac OS X – and drivers are available for Windows systems. Either way, it will be recognized straightaway by any DAW supporting ASIO or Core Audio, including Logic, Cubase, Reaper, and Pro Tools.

EXPANDABILITY
Qu-SB can be expanded to up to 32 mono inputs via dSNAKE, allowing a convenient Cat5 connection to a combination of remote AB168, AR2412 or AR84 AudioRacks. dSNAKE is our proprietary networking solution, boasting a transport latency of only 105us over cable runs of up to 120m / 390'.

The AudioRacks unleash all the power of Qu-SB, giving you access to extra outputs for Stereo Matrix, Groups, or extra monitor Mixes.

AUTOMATIC MIC MIXER (AMM)
AMM is vital in applications such as conferences, meetings and panel discussions where a number of microphones are open at the same time, reducing background noise and minimising the risk of feedback. The Automatic Microphone Mixer feature helps the engineer to manage the levels of multiple mic inputs, ensuring that each speaker's contribution is heard. The D-Classic dynamic gain sharing algorithm is inspired by industry standard automixers. Up to 16 microphone sources can be mixed at once, with each channel having a priority setting which determines its ‘weight' in the total system gain.

QU ECOSYSTEM
Qu provides much more than just a mixer. Qu is an entire ecosystem with Remote AudioRacks allowing I/O to be placed where it's needed, ME Personal Mixers expanding monitor mixes and enabling simple, time-saving local control, Qu Apps for complete remote setup and wireless mixing on stage or anywhere else in the venue, ProFactory Mic presets to speed up preparation time and ensure the best sound, plus USB recording and DAW integration for powerful workflow optimisation from one centrepiece device. 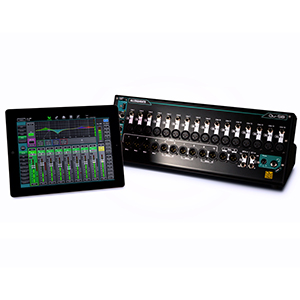