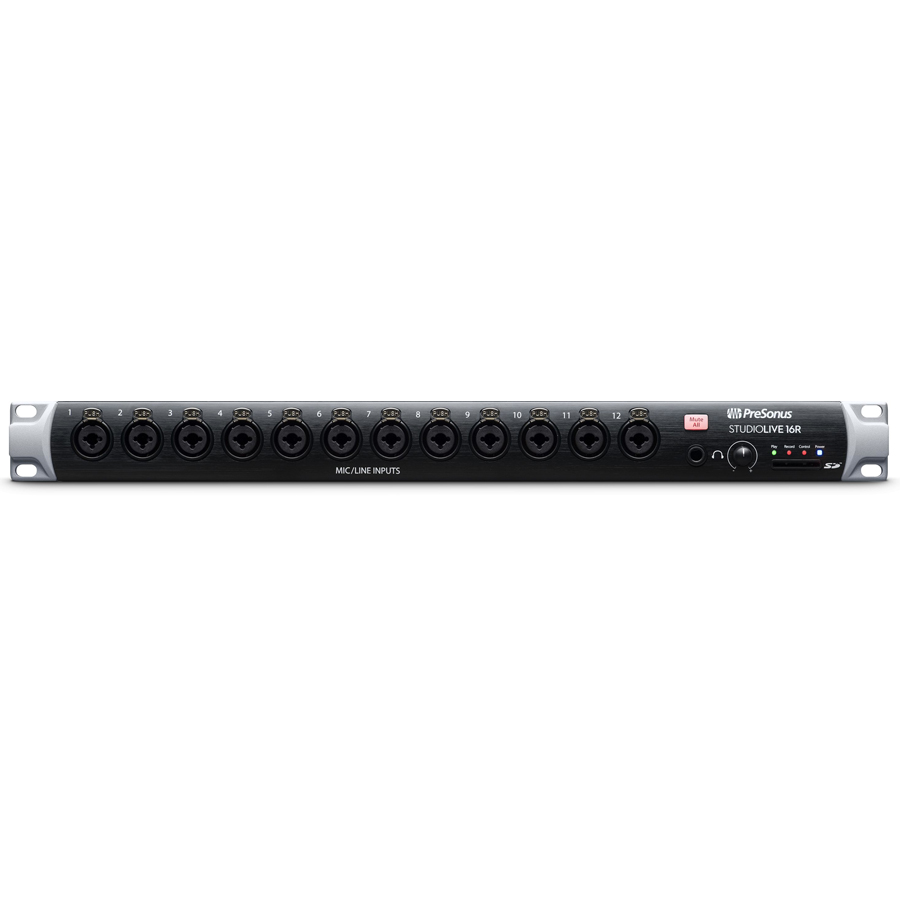 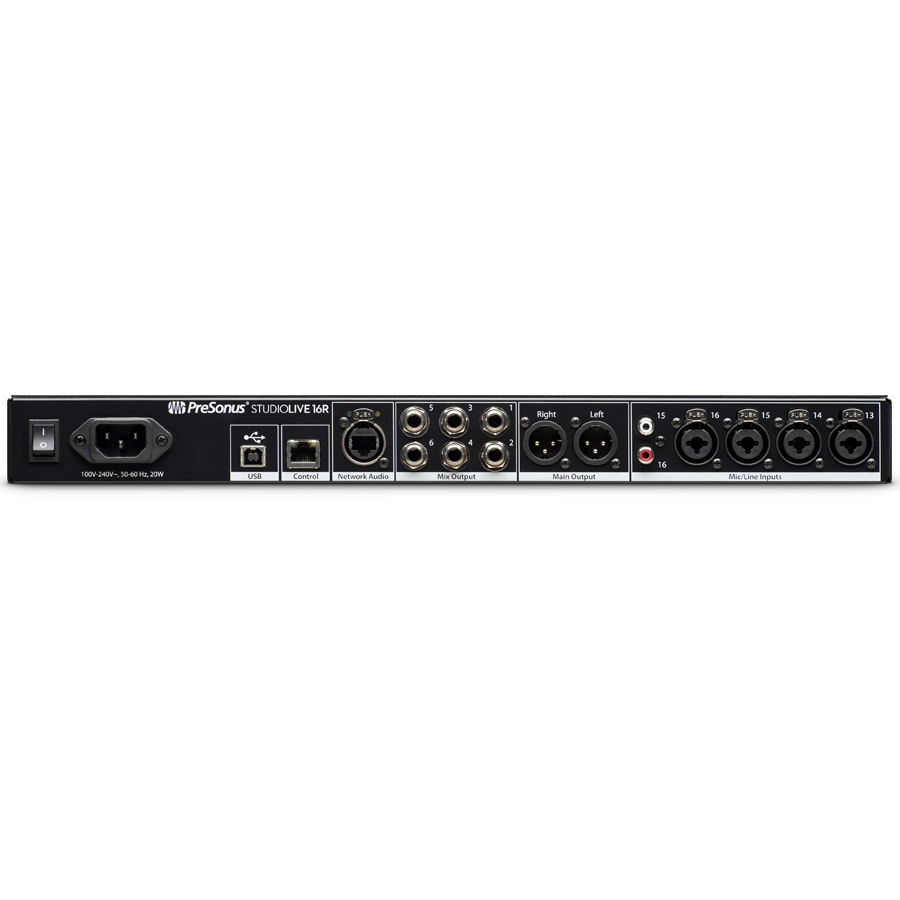 The most powerful rack mixer in its class.
When we say the StudioLive® Series III stage boxes and rack mixers are by far the most powerful rackmount digital mixers in their class, that’s no idle claim. The result of ten years of R&D, third-generation StudioLive Series III rack mixers are fully recallable, including remote-controlled XMAX preamps. Yet despite their extensive features, StudioLive Series III rack mixers actually improve upon PreSonus®’ legendary ease of use while letting you customize their workflow and operations in software to fit the way you work. The coveted StudioLive sound is better than ever, including third-generation Fat Channel processing, re-engineered from the ground up, and vintage-style EQs and compressors. Add built-in AVB networking, multitrack recording via USB 2.0 and AVB, onboard stereo recording to SD Card, and a complete suite of software, and you have a mixing and recording powerhouse that’s equally formidable as a stage box/monitor mixer, as a rackmount front-of-house mixer controlled from a touchscreen computer or tablet, and as the heart of your studio.

Customize scenes and presets in new and powerful ways—including your way.
With StudioLive Series III, we’ve upped the ante and given you more flexibility when working with scenes and presets. Mixer scenes now include Scene Safe. Similarly, we’ve expanded the concept of Fat Channel presets so that presets have, for practical purposes, become like scenes for individual channels, not only saving input and Fat Channel settings but also aux send and bus assignments. Of course you can also use preset filters to choose what you want to recall.

Create buses and groups to suit your workflow with FlexMixes.
Don’t you hate it when you’re setting up for a show and find you have an unused subgroup—but you’re short one monitor mix? That’s not a problem anymore, thanks to six FlexMixes that can be individually designated as aux, subgroup, or matrix mixes. These 6 FlexMixes are in addition to the 2 internal effects sends and the stereo main bus, giving you a total of 10 mix buses, not counting the solo buses. We also provided eight Filter DCAs so you can more easily and flexibly control groups of channels. These are only a few of the many ways you can customize your StudioLive Series III rack mixer exactly to your needs and workflow.

Integrated software package with professional DAW, remote-control apps, and one-touch recording.
PreSonus StudioLive Series III mixers are tightly integrated with an entire suite of state-of-the-art software. Mix wirelessly or over a wired network from anywhere using UC Surface touch-control software for Mac, Windows, Android, and iPad®. Remote control the mixer’s recallable XMAX preamps and Fat Channel processing with Studio One Artist for low-latency recording with effects. (Reverb-drowned singers: rejoice!) Completely automate virtual soundchecks and record shows with Capture. Save mixer scenes with your live recordings in Capture and edit both in Studio One Artist. StudioLive Series III mixers and software work together to form a cohesive ecosystem that helps you achieve your creative vision.

Network-ready, with a choice of recording methods.
Networking isn’t the future of professional audio systems; it’s here now. StudioLive 16R Series III rack mixers come equipped with an AVB Ethernet connection that enables you to network multiple StudioLive Series III mixers and compatible computers and stream up to 32 channels of audio to and from a Mac or Windows PC. You also get 18x18 recording via USB 2.0, giving you a choice of computer recording methods. Each channel can independently access its analog input or its dedicated digital return from your computer. Alternatively, quickly and easily record the main mix—or any other stereo mix—to the built-in SD Card recorder. Upload a show for fans, give the band a reference recording, and more, no computer required. You can even simultaneously multitrack record to your laptop via USB or AVB and record in stereo to SD.

Remote mix control available on a plethora of both wired and wireless devices.
In addition to the AVB recording connection, StudioLive Series III rack mixers sport a 1 Gb Ethernet port that can connect to a wireless router or directly to a computer, providing remote control of virtually all features. Mix wirelessly or over a wired network from anywhere using UC Surface for Mac®, Windows®, iPad®, and Android ™ tablet. Even add a second—or third, or even fourth!—screen for fast workflow. Musicians can control their monitor mixes onstage with QMix®-UC for iPhone®, iPod® touch, or Android device without the need for large monitor networks. Go wireless, wired, or both.

Simple but versatile audio connections.
We kept the StudioLive Series III rack mixers’ front and rear panels clean and simple, yet they have all the connections you need. All 16 channel inputs on the StudioLive 16R use locking combo jacks to accept microphone- or line-level signals. You also get a pair of unbalanced RCA jacks as additional inputs for Channels 15 and 16 for easy connectivity to smartphones, media players, and other consumer audio sources. In addition to main L/R outputs and headphone jack, you get six FlexMix outputs that can each be independently configured as subgroups, monitor outputs, or matrix outputs. The result is a versatile set of connections that provide the access you need in a compact, 1U package.

Superior sound.
Connect a StudioLive Series III rack mixer, and you’ll instantly hear details and an open high end you’d expect to find only in an expensive studio console.​ We built our reputation designing great-sounding analog circuits, including our famous XMAX solid-state, Class A preamps, and we put all of that experience into designing StudioLive Series III consoles and rack mixers. We didn’t cut corners on components, and we just say “No!” to noisy, crosstalk-y ribbon cables. As a result, StudioLive Series III mixers deliver the high-end audio quality you need to preserve your hard-earned reputation for producing great-sounding mixes and recordings.

Now includes Studio Magic Plug-in Suite.
This suite of plug-ins adds a wealth of fresh sounds and effects to Studio One. Cherry-picked from the first names in virtual instruments and effects, each plug-in brings a different flavor of practical magic to your songs. These plug-ins aren't gimmicky one-trick ponies — these are real-deal workhorses that you'll rely on for countless mixes. 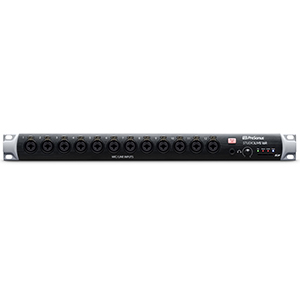