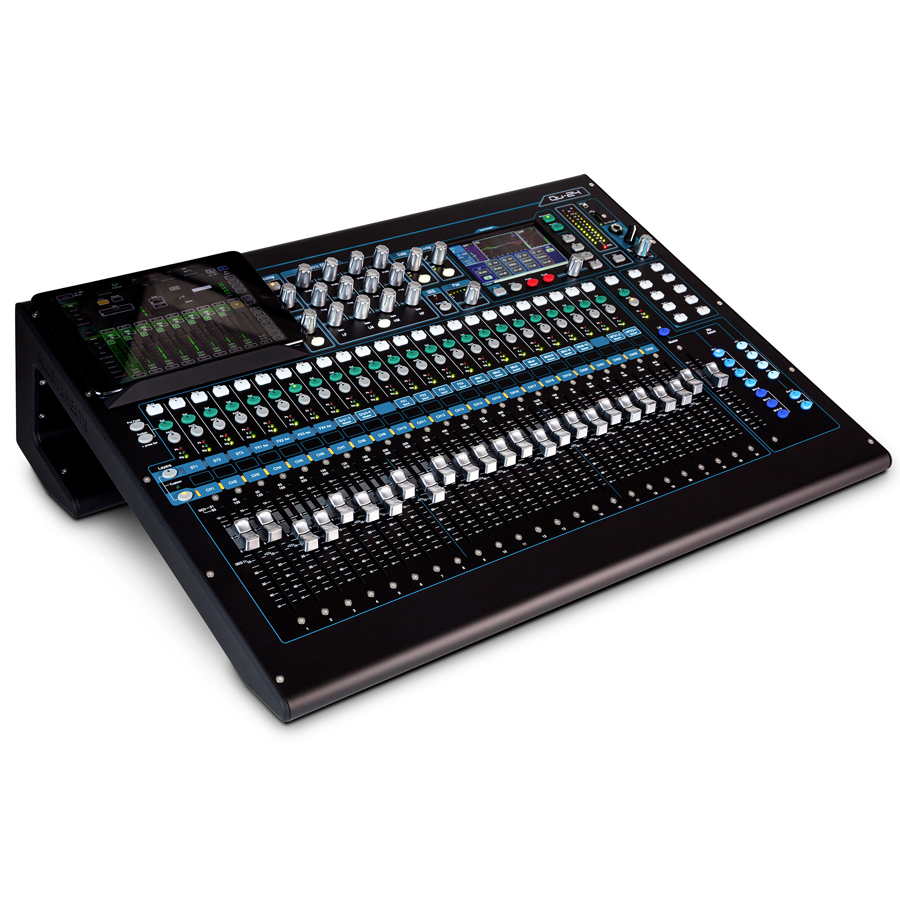 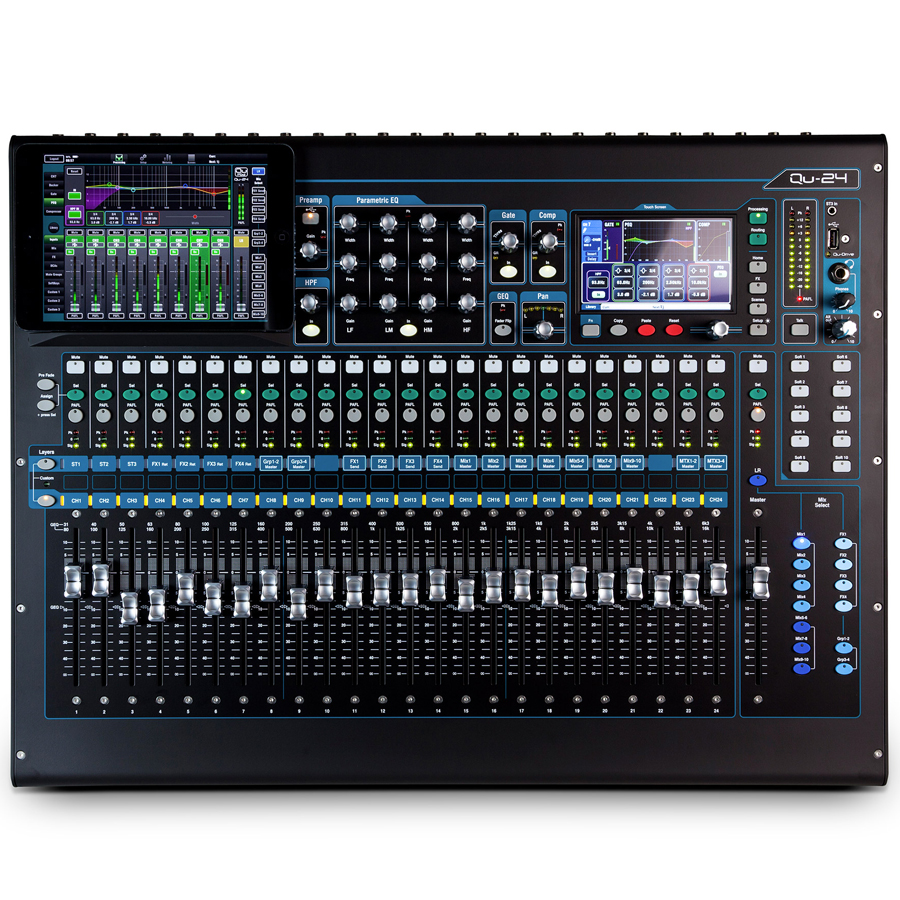 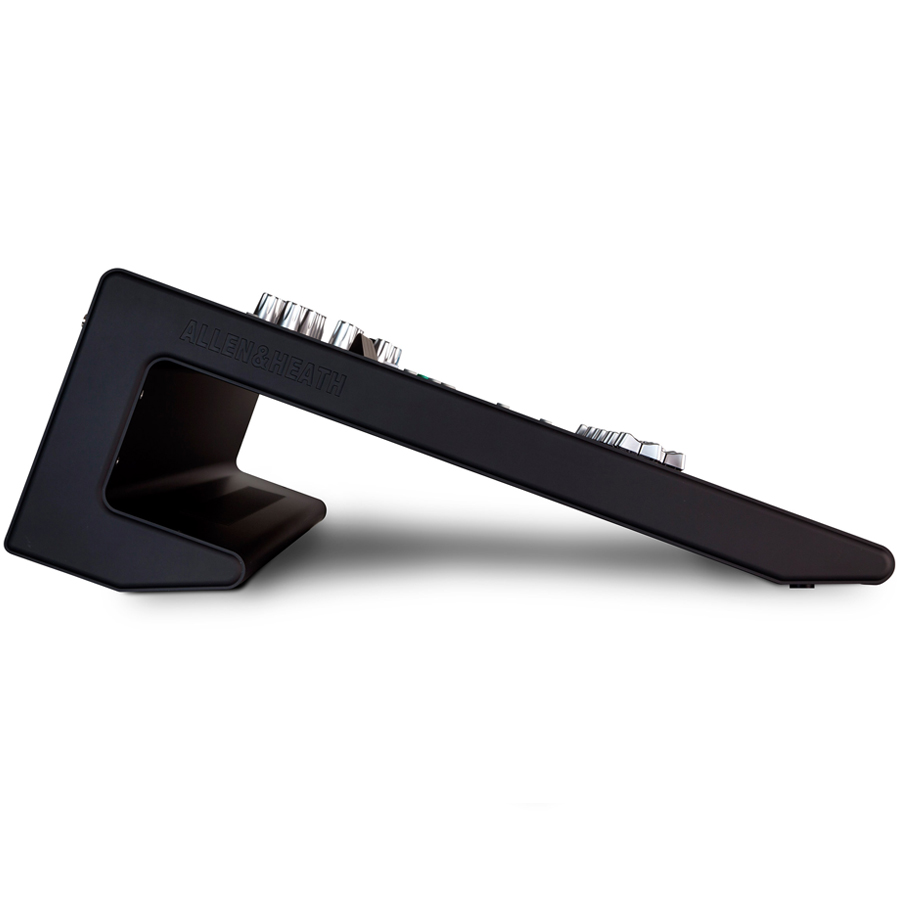 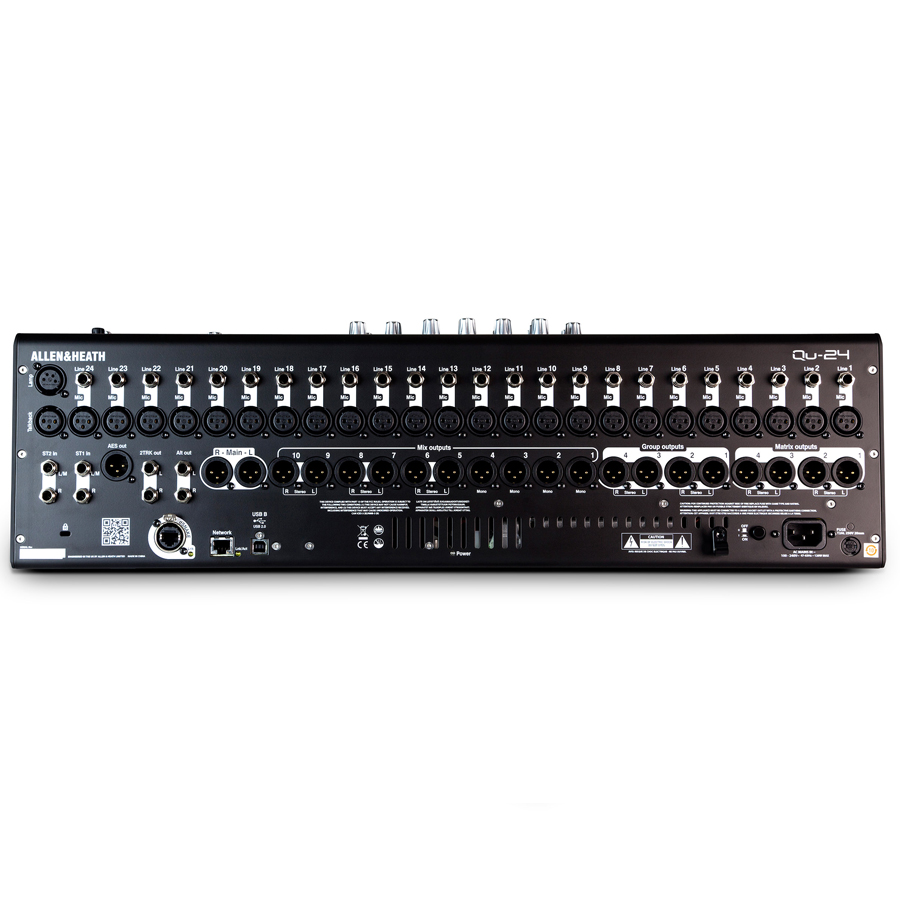 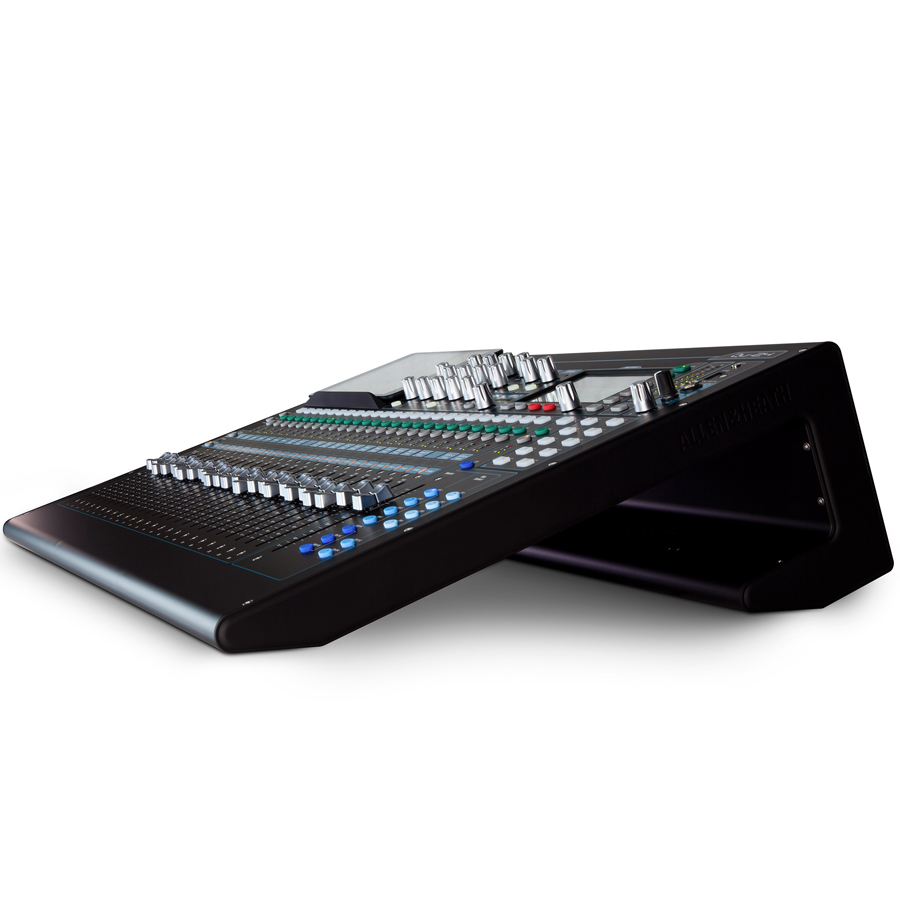 ANALOGIQTM PREAMPS
Qu-16's sixteen AnalogiQTM total recall preamps feature zero crossing detection and an advanced padless 1dB step gain stage, closely allied to the DSP for optimal gain accuracy and audio transparency. The analogue signal is captured by high class, low latency 24bit analogue to digital converters matched to high quality 24bit digital to analogue converters to deliver the required outputs. The AnalogiQTM design has been refined over many months to offer superb transparency, minimal distortion and an ultra-low noise floor, with a warm, musical sound that is missing from some digital consoles.

THE MIXING EXPERIENCE
Having massive processing power and advanced functionality is great, but it counts for nothing if you can't access the controls you need in a heartbeat. Once you start using Qu-16 you'll sense the years of research into ergonomics and the hands-on mixing experience that our team has drawn upon to deliver a wonderfully natural layout and workflow. It's not about recreating an analogue interface, it's about creating an experience that's fluid, comfortable and intuitive for novices, digital natives and old school road warriors alike, making all the benefits of digital mixing technology readily accessible to all. High contrast metallic finish controls complete the picture, offering excellent low light visibility and enhanced tactile control.

TOUCH CONTROL
The 800 x 480, sixteen million colour Touchscreen and its dedicated data encoder form the heart of the Qu-16 interface, providing super-fast, easy access to all settings. The user-friendly interface has been designed with clarity in mind. Dedicated keys and screen tabs quickly guide you to meter and RTA views, FX racks, channel processing, USB audio control, scenes, setup menus and much more.

THE SUPERSTRIP
All your key processing tools are presented in a clean layout on the SuperStrip, with 1 function per physical control. The SuperStrip is complemented by an onscreen Touch Channel for intuitive access to full processing parameters without clutter or complex menu structures. Processing for Mono and Stereo inputs includes trim, polarity, HPF, gate, insert, 4 band PEQ, compressor and delay. The main LR and the Mono mixes have controls for Insert, 1/3 octave GEQ, compressor and delay. The Stereo mixes provide Insert, 4-band PEQ, compressor, delay and balance control.

FADER AUTOMATION
Moving faders started as an expensive option in the studio desks of the 80s, and later became the norm with the advent of digital technology. Nevertheless some entry-level digital mixers lack this precious commodity which is a fundamental part of the Total Recall approach. Fader automation is essential for rapid mixing, especially when you're dealing with multiple monitor mixes – just press a mix key and the faders immediately fly to the send levels for that mix. Qu-16 features 17 motorized ALPS faders, 16 arranged over 2 layers, allowing instant access to all channels and masters in a compact space, plus a dedicated master fader which dynamically follows the mix selection. A third, Custom layer is available for ad-hoc user strip layout, where any combination of Inputs, FX Sends, FX Returns and Mix masters can be assigned.

ILIVE FX
Qu-16's dynamics and FX algorithms are derived from the FX used in our iLive pro touring series. Some of the world's most respected audio engineers have chosen to use iLive's FX on tour in preference to top-end plug-ins and external FX units. Qu-16 boasts 4 stereo iLive FX engines, featuring lovingly crafted emulations of legendary classic reverbs, gated reverbs, delays, modulators, flangers and more. FX are returned to the mix on dedicated return channels, so you're not tying up your mono and stereo input channels. Each Stereo FX Return has a dedicated 4 band PEQ.

TOTAL RECALL
True digital mixing is about being able to save and recall scenes (snapshots) at the press of a button. Qu-16 can store up to 100 full Scenes for recall at will. Channels and mixes can be made Safe from Scene recall. For example, if an instrument or mic gets swapped out after the soundcheck, the channel can be made safe to avoid settings being overridden by Scene recalls. Or if a broadcast feed or walk-in iPod is added last-minute before the show kicks off, that mix or channel can be made safe from any scene change. In addition, single parameter updates can be blocked using per scene Recall Filters or a Global Recall Filter. So if you tweak the graphic EQ to reflect the room response when the audience gets in, you can block this to prevent any overwriting at scene change. Custom settings for each EQ, compressor, channel or FX can be saved as Library presets. This lets you store your tried and tested SM58 EQ or reverb pattern and apply it to other channels or shows. Libraries, Scenes and the complete Show configuration can be saved to a USB key, so you can carry the show with you, ready to use on another Qu-16.

USB AUDIO STREAMING
Qu-16's built-in interface streams up to 24 selectable tracks to your Mac or PC. The returns from the Mac or PC can be easily assigned to the Input channels. The interface is class-compliant on Mac OS X – truly plug ‘n play. It will be recognized straightaway by any DAW supporting Core Audio, including Logic, Cubase, Reaper, and Pro Tools. An ASIO and WDM compatible driver is available for Windows computers. Standard MIDI control is tunnelled over the USB connection so you can easily map the faders to the tracks of your favourite DAW. A DAW Control driver is available for easy setup and emulation of HUI or Mackie Control protocols on Mac OS X systems.

AUTOMATIC MIC MIXER (AMM)*
AMM is vital in applications such as conferences, meetings and panel discussions where a number of microphones are open at the same time, reducing background noise and minimising the risk of feedback. The Automatic Microphone Mixer feature helps the engineer to manage the levels of multiple mic inputs, ensuring that each speaker's contribution is heard. Our D-Classic dynamic gain sharing algorithm is inspired by industry standard automixers. Up to 16 microphone sources can be mixed at once, with each channel having a priority setting which determines its ‘weight' in the total system gain.

QU-DRIVE
Forget soundcard drivers and software setup, Qu-16 has an integrated multitrack USB recorder, providing 18 channels of 48kHz 24bit recording and playback straight to / from your USB hard drive. Capturing multitrack recordings of your shows has never been so easy. A selectable stereo pair can be recorded alongside the 16 Mono channels, and multitrack audio can be played back to the 16 Mono channels plus ST1. On top of this, Qu-Drive also provides stereo recording, patchable from any pair of Mix outputs, the Main LR (pre, post, or summed to mono) or even the PAFL bus, with 2- track stereo playback to ST3.

ARMED TO THE HILT
Qu-16 is equipped with 5 cores of high efficiency ARM core processing, with dedicated ARM cores running the touchscreen display and surface, USB streaming, Qu-Drive multi-channel USB recording / playback, Ethernet and fader automation. Between them the ARM cores provide state-of-the-art processing, working in parallel to deliver extensive control, instant-on operation, and lightning-fast response. The mixer's DSP farm exploits next generation dual core DSPs, giving 10 DSP cores, with 8 dedicated to the channel and mix processing alone. The Qu-16 DSP architecture employs varied bit depths, tailored to specific algorithms, with 48 bits on critical EQ functions and a 56 bit accumulator on the mix bus where it really counts, allowing every nuance of the audio to be captured in the final mix.

THE SHAPE OF THINGS TO COME
Made from 18 gauge, cold-rolled Zintec steel, Qu-16's distinctive frame is designed for strength, rigidity and ease of rack mounting. We've done unspeakable things to that chassis in the lab and it's taken everything we've thrown at it – even being stomped on by our resident ex-tank commander.

Silence is a precious commodity in the live or studio environment, which is why nobody wants those moments of stillness ruined by the whirring of fans coming from the mix position. Qu-16's sleek profile generates optimal airflow through the mixer, eliminating the need for any fans.

The shape has some unexpected benefits too. When we started taking Qu-16 out to gigs we soon found the space beneath it incredibly useful for keeping our USB drive, talkback mic, cue sheet and other clutter tucked out of the way. We've even had engineers hanging the mixer from a handy scaffold bar and mixing vertically.

QU-PAD MIXING APP
Add the Qu-Pad iPad app to your Qu-16 setup and you're free to adjust the monitors on stage, roam around the venue whilst tweaking the PA, and then mix the show from the heart of the audience. Qu-Pad connects to the mixer over Wi-Fi and gives instant access to all live mixing parameters and settings.

ME PERSONAL MIXING SYSTEM
Qu-16 is fully compatible with our ME Personal Mixing System. Any number of ME-1 personal mixers can be chained from the dSNAKE port (or from an AR2412 Stagebox if you've got one connected to the dSNAKE port). Each performer can be given tailored control over their own mix, leaving the engineer free to focus on the audience experience. Find out more at allen-heath.com/ME

DSNAKE
Qu-16 is a self-contained mixer, so if you've already got the analogue cables you're good to go. If you're thinking of trading in the copper multicore for a Cat5 digital snake, Qu-16's dSNAKE port has you future-proofed, allowing connection to a remote AB168, AR2412 or AR84 Stagebox. dSNAKE is our proprietary networking solution, boasting a transport latency of only 105us over cable runs of up to 120m / 390'. So if you're mixing FoH you can place your I/O on the stage and run a single Cat5 cable back to the Qu-16 in the mix position. 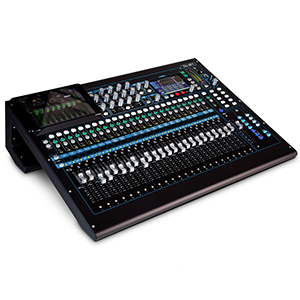