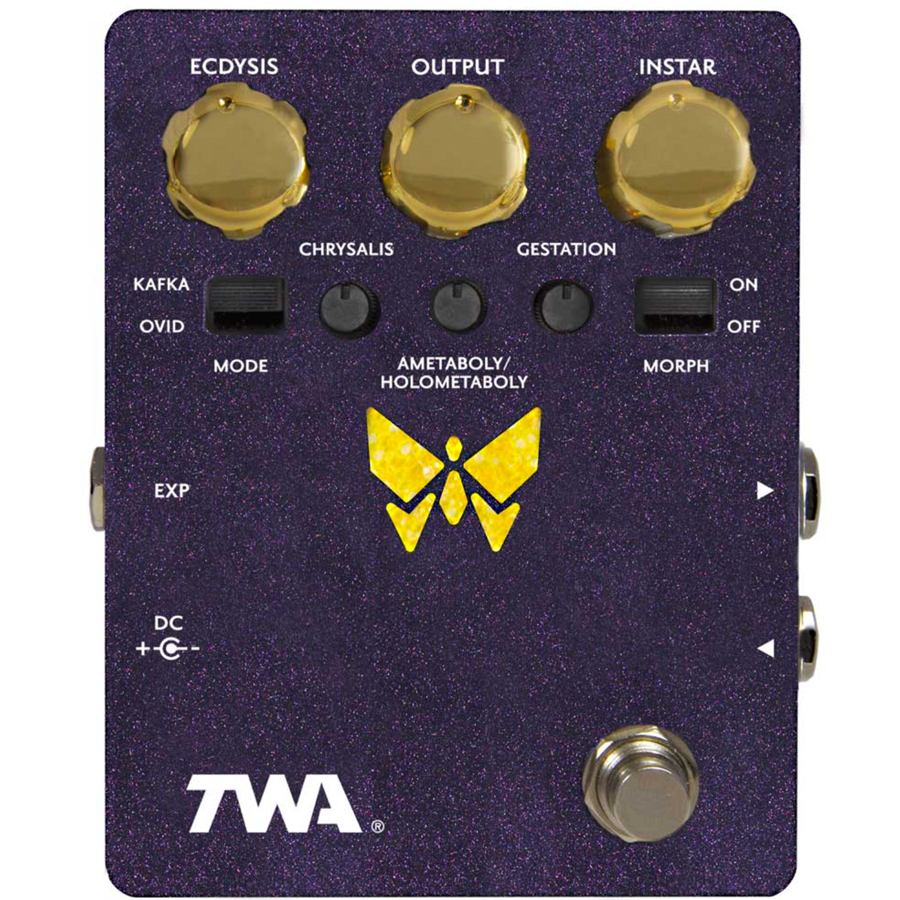 The TWA Team is super stoked to announce our most unique invention yet – the DM-02 Dynamorph™.
Distortion, Fuzz, Filter, Synth the Dynamorph is all of these, and much more.
Featuring a distortion circuit where the amount and type of saturation is intricately and inextricably linked to the input signal level, Dynamorph™ creates multi-layered, highly complex waveforms that twist and morph your instrument's harmonic structure in bizarre yet decidedly musical ways.
Add to this an envelope-detection circuit that allows control of distortion events via playing dynamics, and you have the extremely powerful tool for musical expression that is Dynamorph™.
Depending on control settings and playing technique, Dynamorph™ can create an almost unlimited variety of filthy, flittering filter effects that will add depth and dimension to your notes. Tight chirps, greasy gurgles, & long, yawning sweeps are all available by simply varying your picking attack.
A light touch with low Drive settings can yield sagging, fuzzy burps that reside somewhere between a "starved voltage" fuzz and a dirty Moog filter set to tight decay.
Increased Drive settings create higher order harmonics that subsequently drop in pitch as the note decays (think swept resonant filter). Playing double stops and chords will generate bizarre intermodulation effects that border on ring modulation but with less dissonance.
Turning up the Gain makes the Drive hit harder (a lot harder), resulting in extreme compression and more complex, thick harmonics with massive sustain.
Digging in hard with higher Drive & Gain settings will bury your notes under a torrent of waveforms battling for evolutional supremacy – the victor finally blossoming into a screaming, searing siren-song.
Turning on the Morph function opens up an entirely new range of control over these effects, as the amount of Drive can now be controlled via playing dynamics as well. Notes will swell from zero volume into sustained harmonic glory, their tonal characteristics reacting and morphing in real time to the level changes preset by the Instar & Gestation controls.
All of these tonal transformations can be further adjusted via the Mode switch that selects between two different overall EQ settings for the pedal. If things need to be reigned in a bit, just blend in some dry signal using the Ametaboly/Holometaboly control.
For even further control options, the Morph function can also be controlled manually via an external expression pedal, allowing notes to be swelled in and out at will to create massive, sizzling synth pads.
If you've grown bored with the status quo of disappointing drives and flatulent fuzzes, then plug into the DM-02 Dynamorph™ and witness your tone transform from an inchworm into a 600-Lb. mutant metallic Butterfly – with teeth.

At the heart of the DM-02 Dynamorph™ circuit is a string of full-wave rectifiers. In front of this diode array sit two high-gain preamps set in series – the output levels of these pre's are controlled by the Drive and Gain controls accordingly.
As the diodes are hit with increasing signal level from the preamps, they bias either positive or negative, or not at all. The resultant waveform is a combination of many, including sine, triangle, square, and interactions of all of these. The more level that the diodes are hit with, the more non-linear and wackier (technical term) things will get.
This primordial harmonic soup is then passed along to an op-amp that sums it all. However, since these distortion events are non-linear in nature, there is also subtraction, which yields further tonal filtering and changes to the waveform output.
The Morph circuit is a high-gain VCA to activate the Drive; a smooth gate that makes the harmonics sweep versus level, tracking the incoming signal from the instrument. The more drive, the more the apparent EQ of the distortion changes, again, giving notes a varying degree of harmonic "movement."
DM-02 Dynamorph™ features TWA's® proprietary S3™ "Shortest Send Switching™" - a form of relay-based True Bypass switching that provides the most transparent bypass sound available. S3™ switching also automatically reverts the pedal to bypass mode if power is lost – an essential failsafe for live gigs. 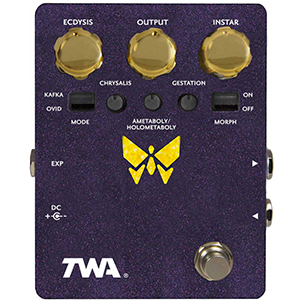