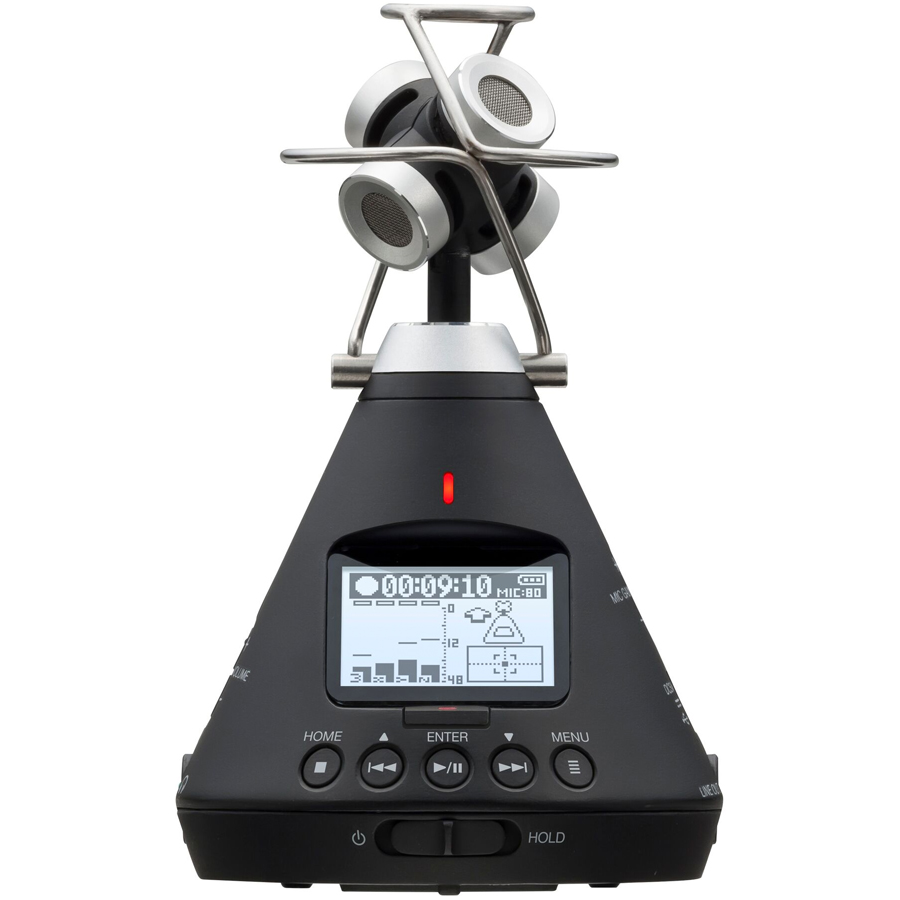 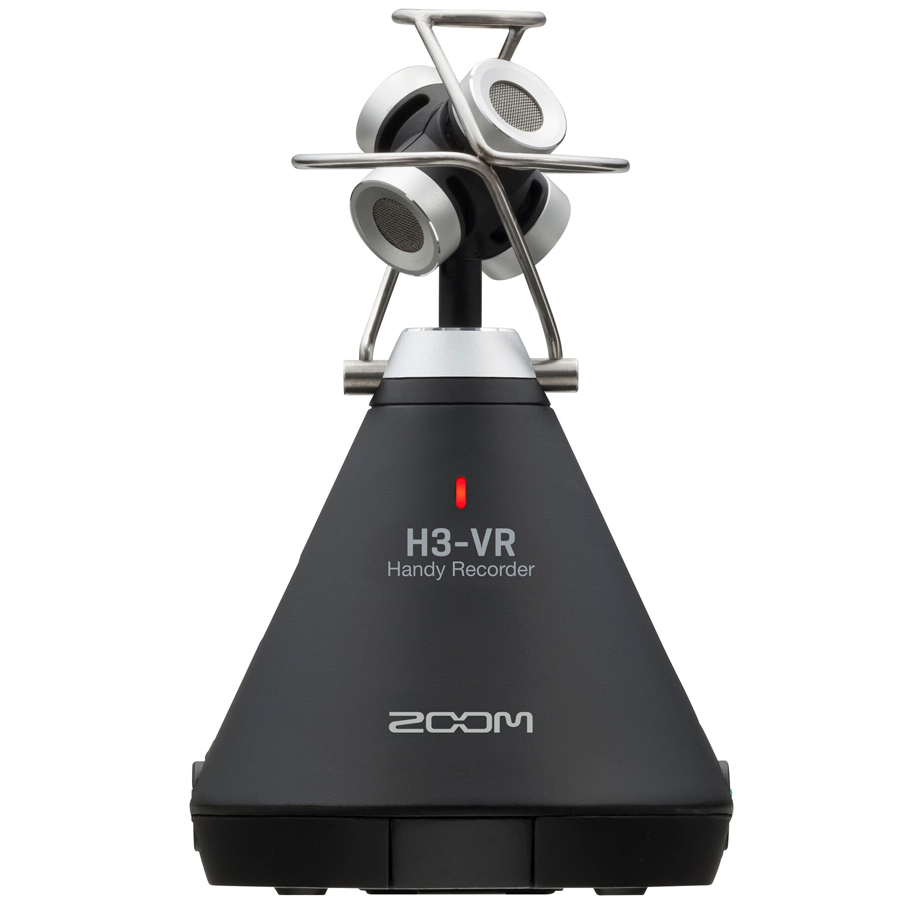 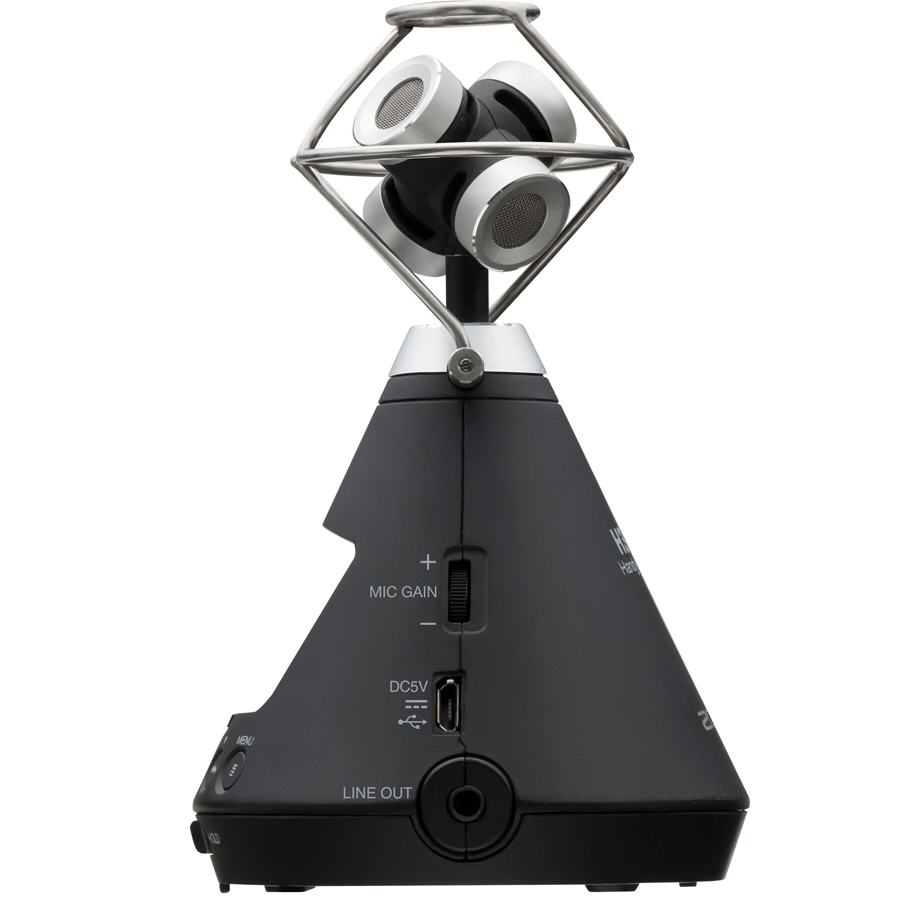 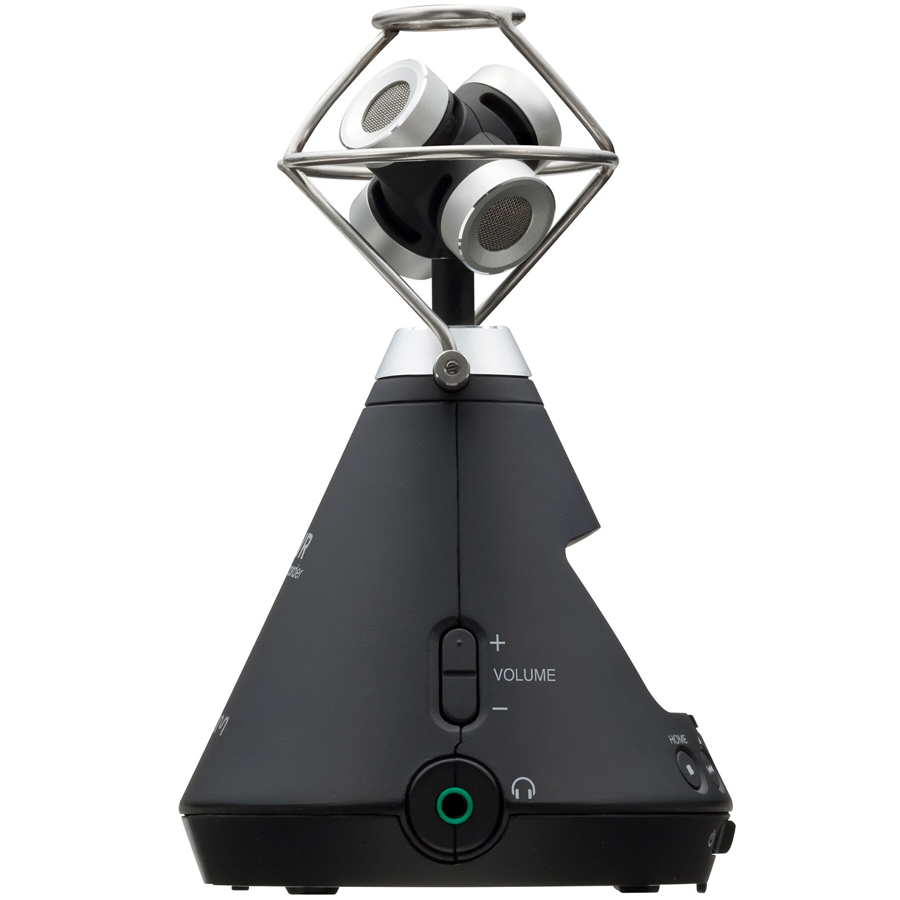 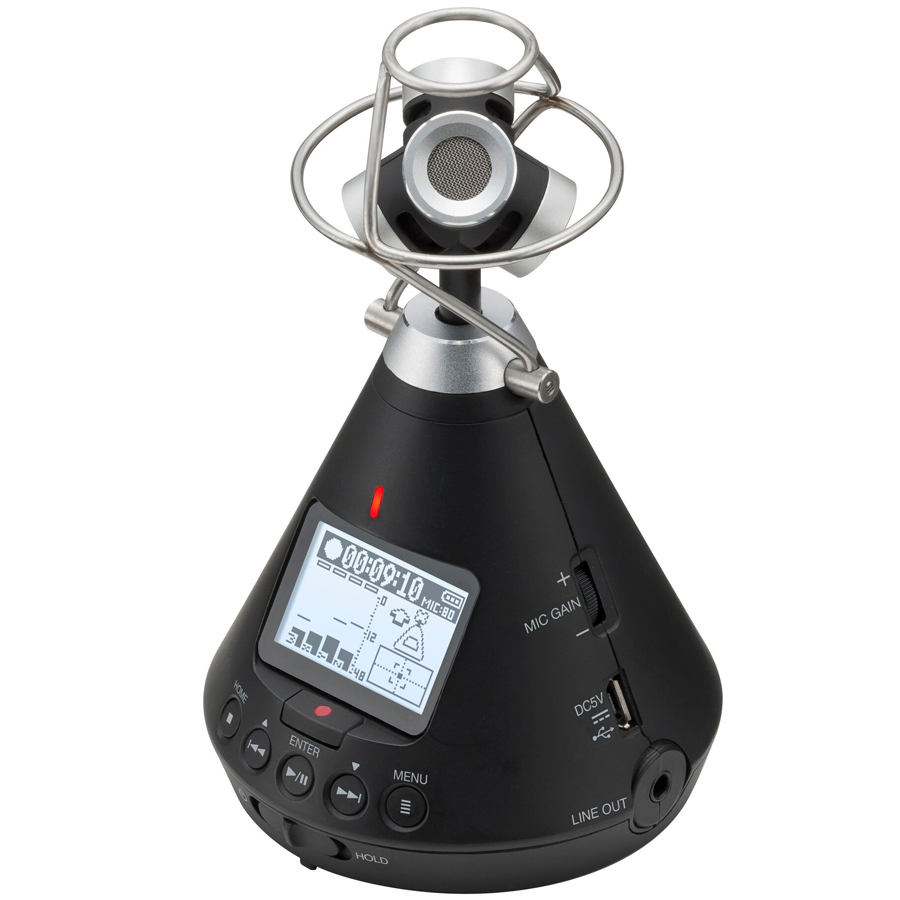 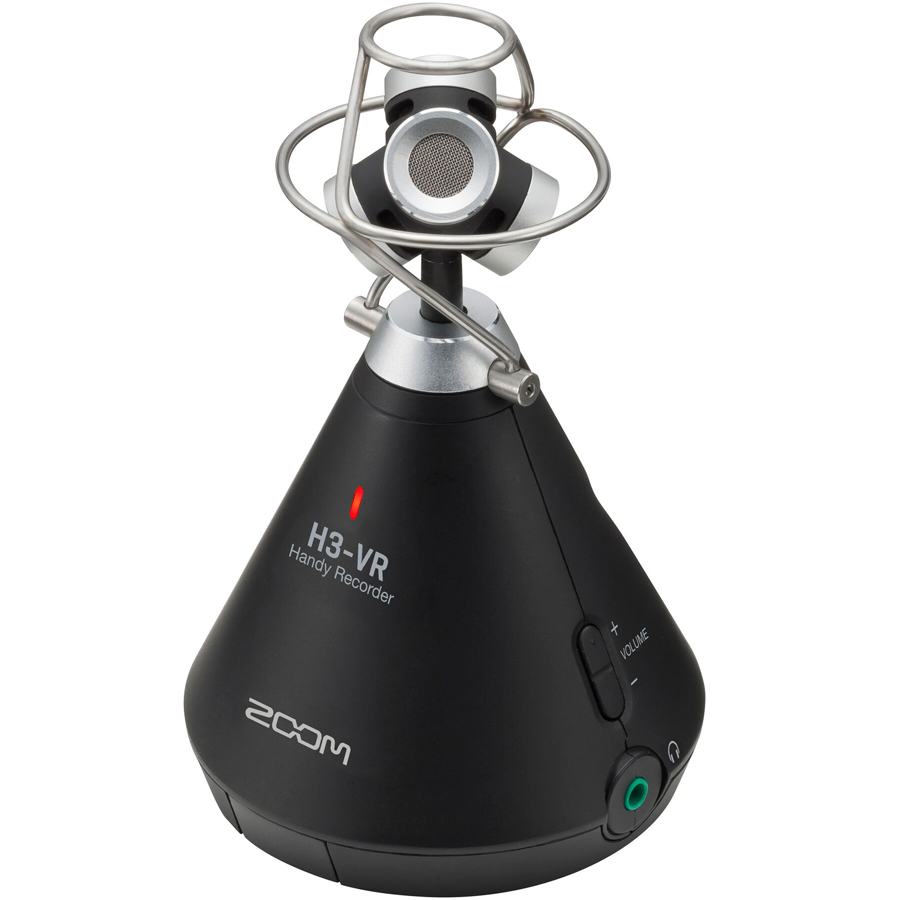 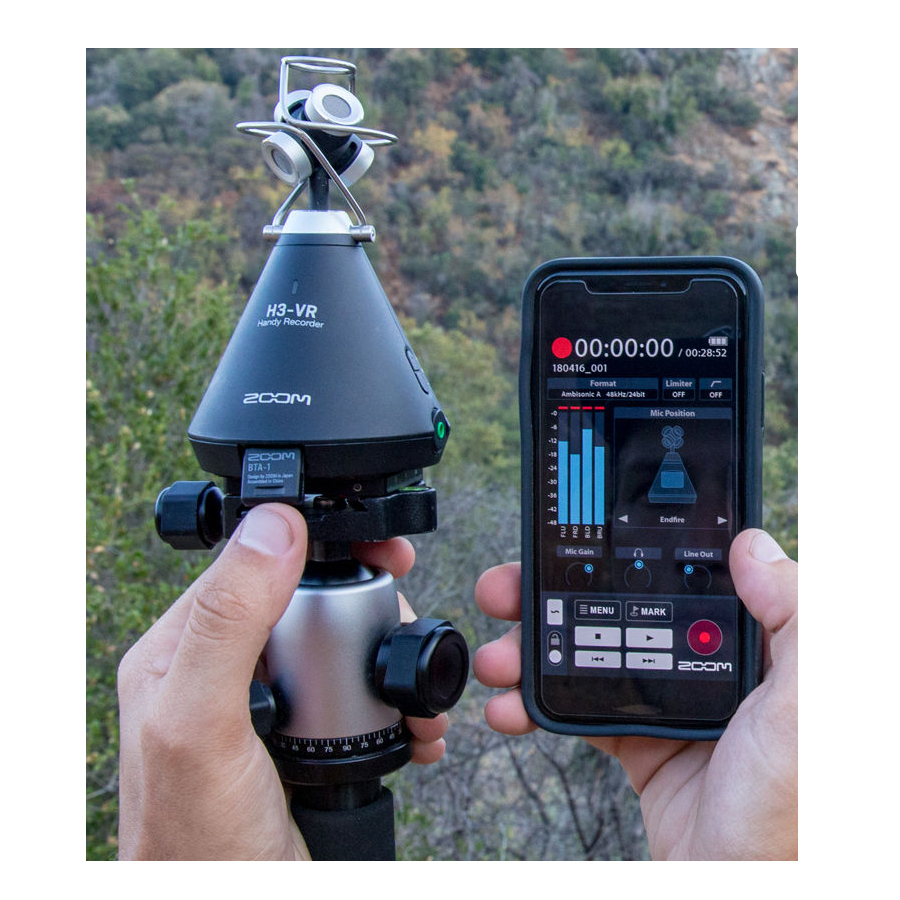 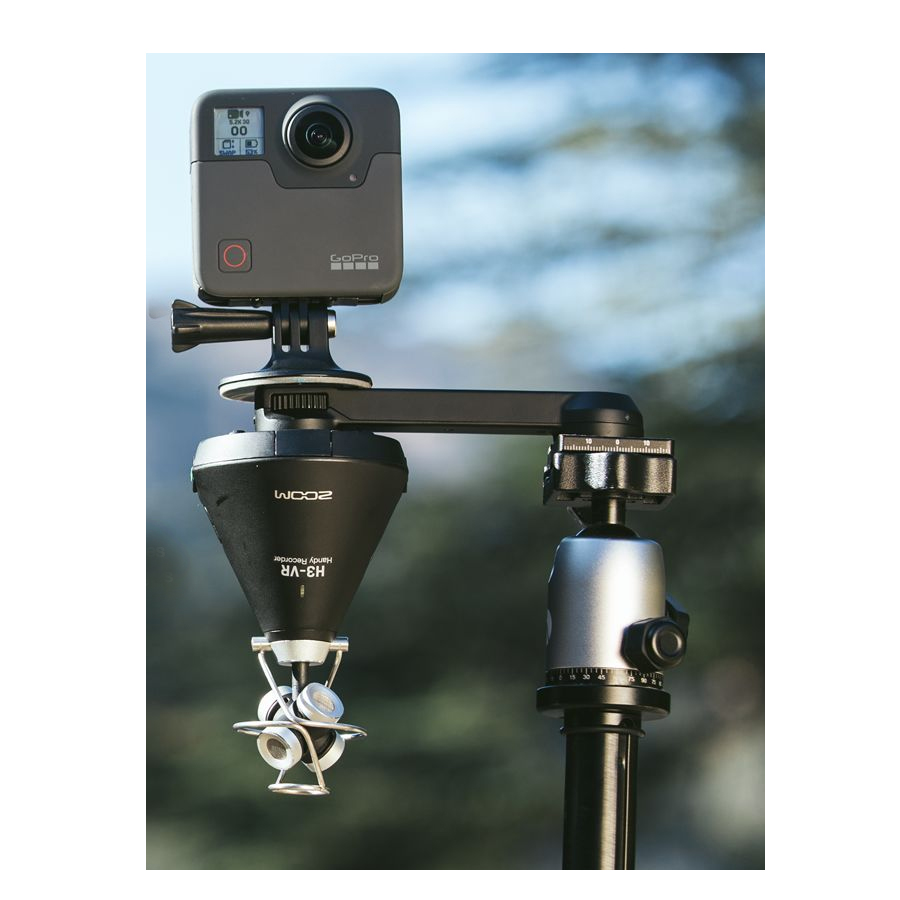 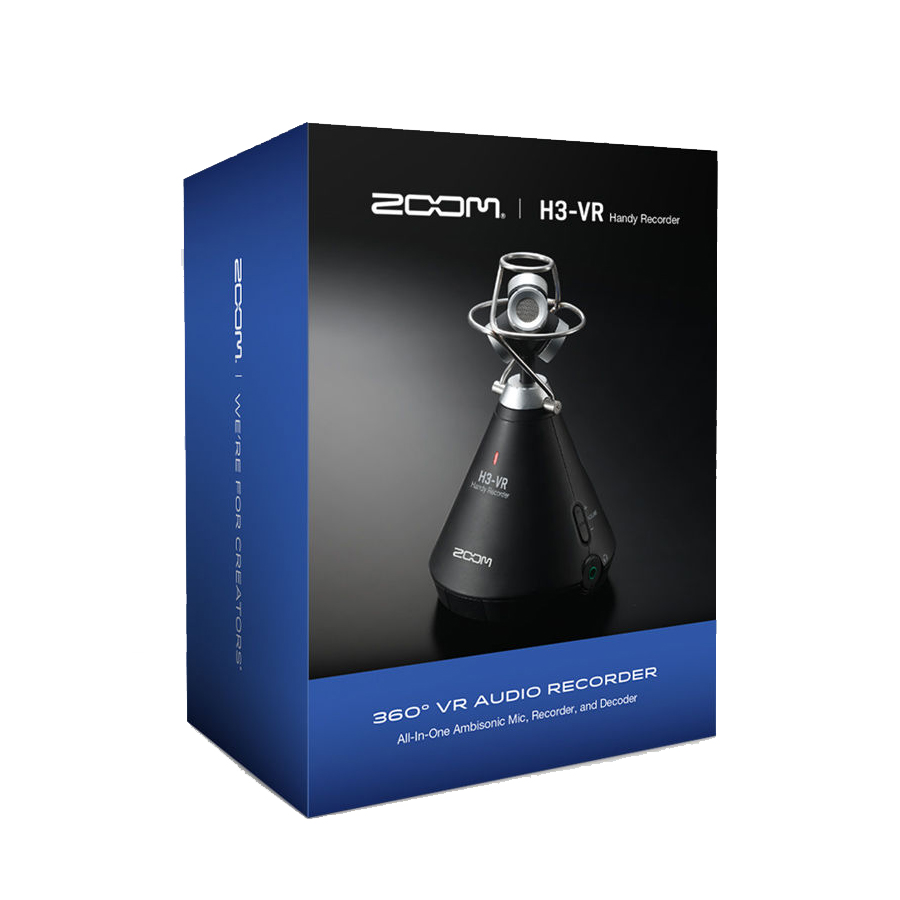 Whether you’re a game developer, filmmaker or musician, virtual reality is the undeniable future of content creation. While 360-video is exploding in popularity, the ability to easily create 360-audio has lagged behind...until now.

ONE-STOP VR AUDIO
The Zoom H3-VR virtual reality audio recorder is the complete solution for capturing and processing spatial audio for VR, AR and mixed-reality content. With a built-in Ambisonic mic, recorder and decoder, the H3-VR puts 360-audio in the palm of your hand.

A NEW WAY TO GO FROM A TO B
In the past, capturing VR audio required a dedicated Ambisonic mic, a separate recorder and a computer for encoding the audio from raw Ambisonics A format to VR-ready Ambisonics B format. Now, with the H3-VR, all of the encoding and decoding is done on board, saving time, money and effort at every step.

AUDIO FOR EVERY REALITY
Ambisonics Audio for VR The H3-VR’s 4-capsule Ambisonic mic captures precise 360-degree VR audio recordings up to 24 bit/96 kHz. And without ever connecting to a computer, the onboard decoder allows you to export Ambisonics B-format files directly. Binaural 3D Stereo
The H3-VR also records stereo binaural WAV files up to 24 bit/48 kHz. Stereo binaural provides a hyper-realistic spatial recording that enhances 2D productions with 3D audio. Standard StereoThe H3-VR even offers standard stereo recording for recordings that will be played out of speakers rather than headphones. 5.1ch Surround for VideoFree to download, Zoom Ambisonics Player software can easily convert Ambisonics audio to a 5.1ch surround file that is pre-aligned to the proper speakers, and is exported to your video or audio editor for syncing with standard video.
Live Streaming 360 The H3-VR also enables you to live stream events in 360 degrees so that wherever your fans are, they’ll have access to the best seats in the house.

FITS ANYWHERE. CAPTURES EVERYTHING.
The H3-VR’s compact, conical design captures audio from multiple angles without getting in the way of the camera or the action.

UPGRADE YOUR GAME EXPERIENCE
The slam of dungeon doors, growl of monsters or howl of the wind can make or break a player’s fantasy. With the ability to capture high-quality in-game audio, you can elevate your player’s experience to new levels.

MONITORING & PLAYBACK
Monitor your audio live in stereo binaural or use the H3-VR’s onboard Ambisonics Decoding to simulate your recorded 360-experience during playback.

DESIGNED WITH INTENTION
A) Output Volume Controls The H3-VR’s line out volume control lets you adjust the output volume to a DSLR camera, additional headphone, etc. B) Headphone Jack A dedicated headphone jack allows for stereo binaural monitoring of your audio while recording.C) Dynamic Display A directionally-responsive LCD screen provides a bright, clear display even when upside-down.D) Transport Controls The Home, Play/Pause, Forward, Reverse and Menu buttons are positioned for quick access.
E) Power/Hold Button Lock your settings on the H3-VR while recording using the unit’s Hold function. F) Precise Internal Clock The H3-VR’s highly accurate internal clock with 0.5 ppm discrepancy reduces audio/visual drift. G) Slate Tone / Sound Marker Using the slate tone enables you to easily calibrate the H3-VR and camera audio levels. Use the sound marker to output a tone when recording starts to make syncing audio and video easy. H) Built-in LimiterThe H3-VR features a built-in limiter to prevent clipping and distortion during your most dynamic moments. I) Low Cut Filter The H3-VR’s adjustable low cut filter removes unwanted low-end frequencies. J) Input Volume Gain With the single-knob gain control, you can easily adjust the gains of all four mic capsules simultaneously for accurate, balanced 360-degree audio. K) Power Options Two AA batteries can power the H3-VR for over 11 hours. For longer shoots, the H3-VR can also use portable USB batteries or be plugged in via an AC adapter. L) 3.5mm Line Out The H3-VR fits right in with your existing gear, featuring a dedicated line out for a wide range of 360 cameras or other external devices. M) Lightweight/Portable Design Weighing less 5 ounces (120g), the H3-VR is the perfect Ambisonics recorder to take on the go. And since H3-VR records directly to an SD card, there’s no need for external gear.[VIDEO 2]

STREAMING AND MORE
Perfect for live streaming, video conferencing, direct recording and more, the H3-VR’s audio interface mode turns it into a USB 360 mic for your computer or stereo mic for your iOS device.

OUT OF THE SHOT BUT IN CONTROL
Staying out of the shot can be tricky when recording a 360-degree video, which is why the H3 Control App lets you remotely access transport controls, level settings and metadata notes right from your iOS device.* *Optional BTA-1 adapter required 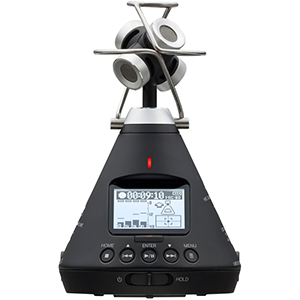