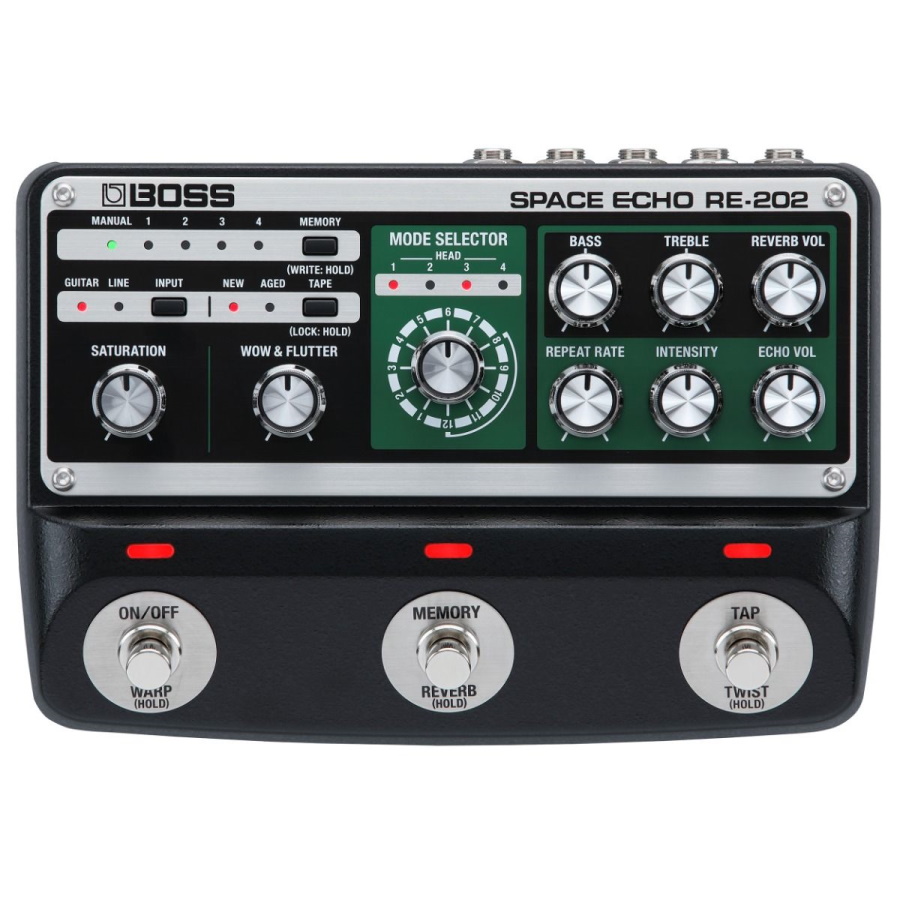 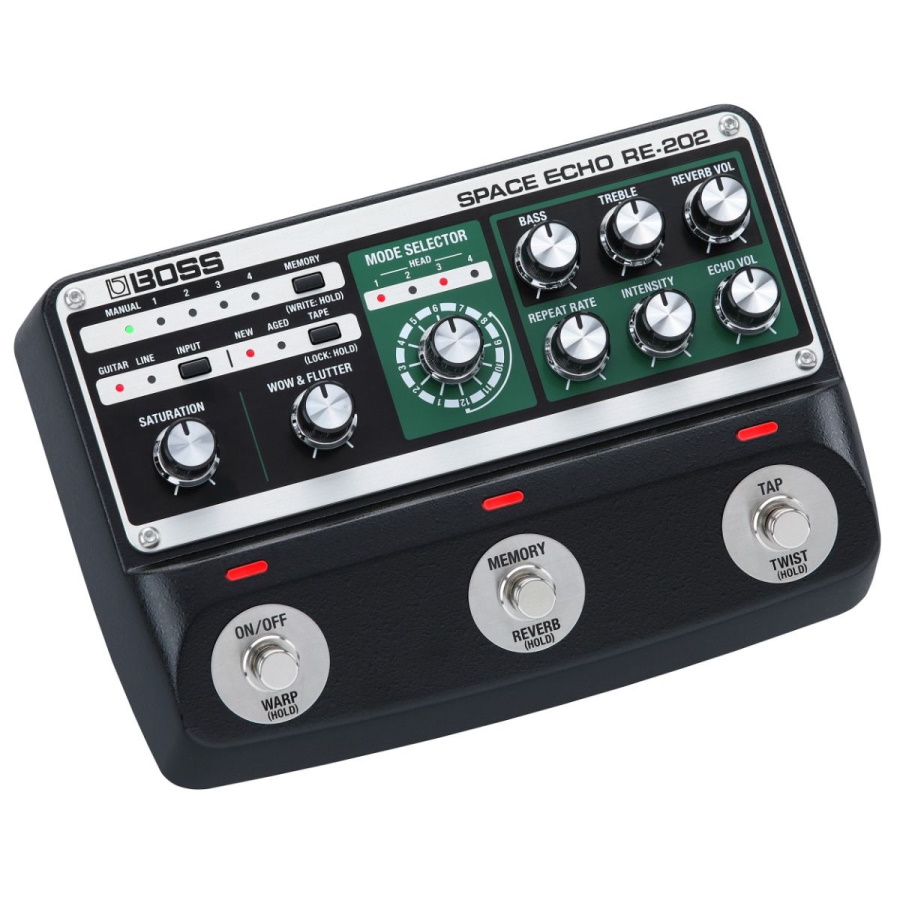 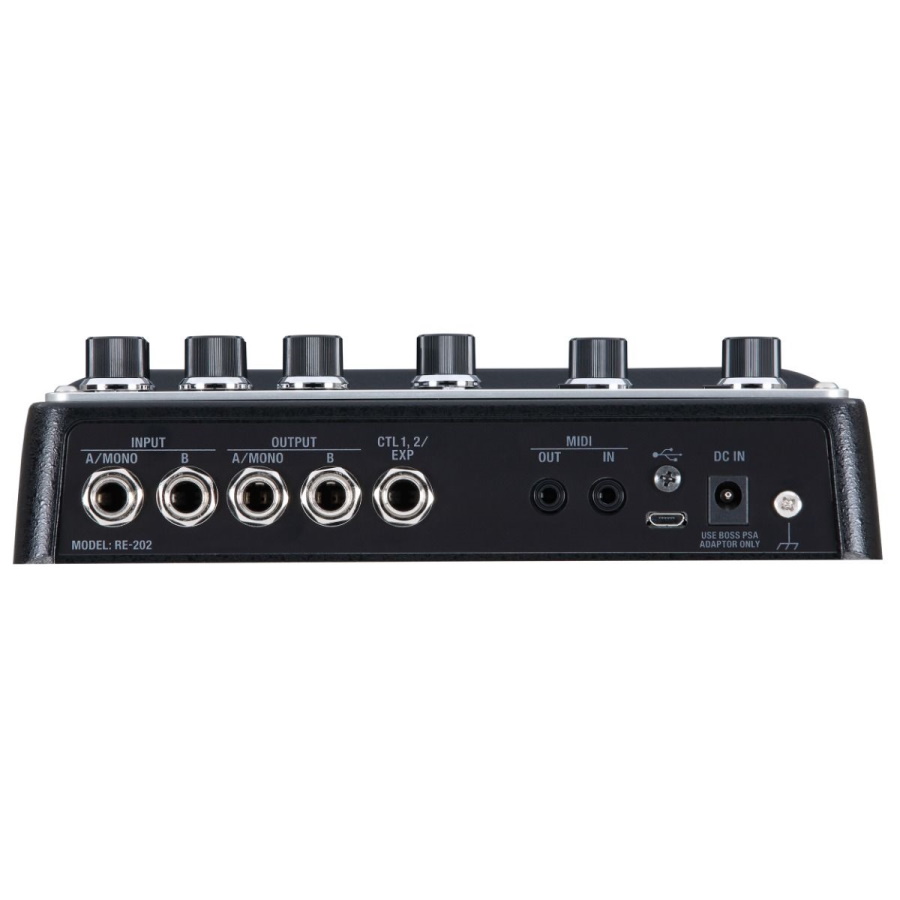 he BOSS RE-202 Space Echo effects pedal faithfully delivers the authentic sound and behavior of the iconic Roland RE-201 Space Echo in an advanced delay pedal with modern features. Introduced in 1974 and produced for over 14 years, the Roland RE-201 Space Echo was known for its distinctive rhythmic echo sounds, warm character and highly playable sonic quirks. Built by the company that designed the original, the RE-202 captures the magic with flawless recreations of everything that influenced the RE-201's sound, including the tape path, record/playback mechanism, motor variations, preamp coloration, tape age, spring reverb character, and more, plus a slate of all-new algorithms.

The RE-202 delivers the full vintage vibe of the RE-201—without the need for regular tape replacement and hardware maintenance. All the core controls of the original are here, including the iconic 12-position mode selector, and every behavior is accurately replicated, such as the gradual pitch change that occurs when the Repeat Rate knob is tweaked, or the cool runaway feedback that happens when the Intensity knob is maxed. With selectable tape age and variable controls, you can dial in everything from a brand-new Space Echo to the worn character and quirks of a well-loved vintage piece. The Saturation control has been carefully calibrated based on the actual magnetic tape and preamp behaviors of the RE-201, with the sound becoming warmer and more compressed as you turn up the knob. And with the expressive Wow & Flutter control, you can conjure all the natural modulation characteristics that are essential to the Space Echo sound.

The RE-202 includes many new features that extend the Space Echo for today’s sound. Twice the delay time is available, along with a fourth virtual tape head that unlocks five additional sound combinations. There’s also an echo type that changes the distance between the heads, and true stereo I/O and selectable operation for guitar or line-level devices. For the dry sound, you can choose between the warm and fat RE-201 preamp tone or a clean signal with zero processing. Also included is a stereo version of the original spring reverb sound from the RE-201, along with hall, plate, room and ambience types for additional versatility. Expressive Warp and Twist effects are available as well, allowing you to launch the sound into outer space with the press of a footswitch while performing. There are four onboard memories for storing and recalling favorite sounds, and 123 more are accessible via MIDI program change. Tap tempo is also on hand, as well as selectable delay carryover when switching memories. It’s also possible to mute the dry signal for parallel effect setups and studio usage. Expanded control is available via external footswitches, an expression pedal, and MIDI, including real-time operation of multiple parameters at once. 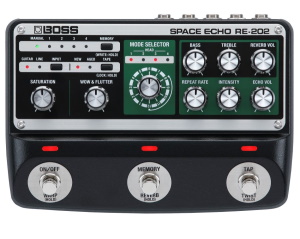