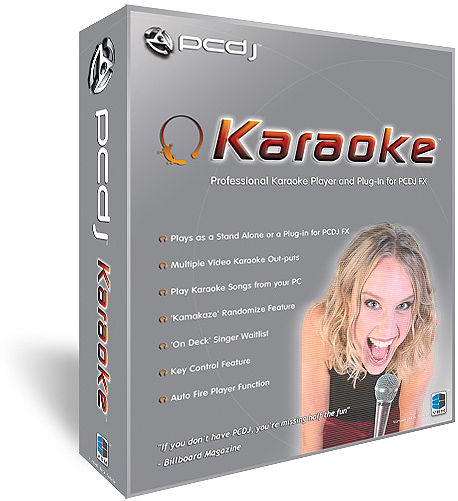 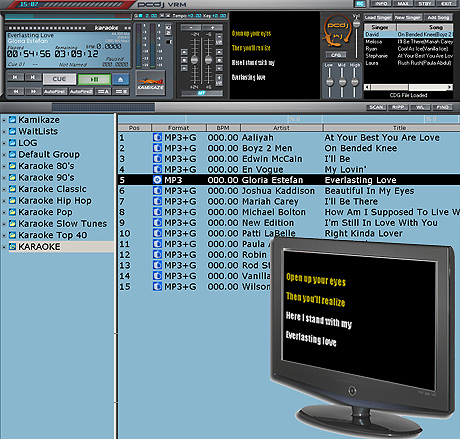 PCDJ-KJ can now deliver the ultimate power of the Karaoke Machine to your PCDJ. PCDJ-KJ works within the new PCDJ FX giving you an additional Karaoke player and video output that appears in the FX software interface allowing the user to switch from DJ to Karaoke mode within the same display. PCDJ-KJ uses MP3+G and WMA+G files, so there’s no more need for CDs to carry or play. It’s all stored within your PC’s hard drive making karaoke performance faster and lighter. Access, Search, Load and Play songs fast and easy within the PCDJ FX record case then fire off either of the PCDJ players as background automatically while swapping singers.PCDJ-KJ is a high performance professional Karaoke product that is downloadable and installs within PCDJ FX. PCDJ KJ is ideal for the working DJ to the Karaoke enthusiast. Enhance your karaoke show with this simple yet powerful player that sets the standard in karaoke performance for the 21st Century.

Karaoke Player
PCDJ-KJ comes with it’s own high performance player to operate and control your MP3+G and WMA+G karaoke files. The player utilizes the PCDJ sound engine and displays elapsed time, remaining time, track name and BPM. The karaoke player also has an ’Auto fire" option which when applied will automatically start player A, B or both immediately after the karaoke song ends. This function is great for smooth professional transitions to background music while the next karaoke singer is taking place on stage. The karaoke player also gives the ability to the DJ to beat match to player A or B. Now you can add a cool beat or remix your karaoke songs!

Video Outputs
PCDJ-KJ comes with 2 video output screens. One screen is anchored to the software interface for the user to control and the other is a floating window that can be output to an additional monitor and enlarged to full screen for the singer to read off. Watch the karaoke lyrics sync up with the music without a CD in sight. PCDJ-KJ also comes with independent volume and EQ controls, so the user can fine-tune karaoke songs easily. PCDJ-KJ sets the standard in digital performance for the professional.

Pitch Shift and Master Tempo
Included in your PCDJ-KJ is a professional pitch shift control that lets the user step the key of the song up or down to suit the singers range. Now the karaoke singer has the ability to sing songs that normally would be too high or too low for them to sing. Just pitch shift the karaoke song down, or up, until the key of the song is suited for that person. This is a great professional feature that puts PCDJ-KJ above the rest.

The Record Case and ’Kamikaze’ feature
PCDJ-KJ utilizes the powerful record case in PCDJ FX that gives the user the ability to search, sort, and organize the karaoke music in multiple ways. The record case also allows the user to save play lists and keep a log of the songs that were played. The PCDJ-KJ software also comes with a ’Kamikaze’ button feature. This is a random singer control. Just get your karaoke singer on stage and press the ’Kamikaze’ button and see what song it loads. This is a great feature for competitions or if you have any hecklers in the crowd, get them on stage and go kamikaze!

On Deck’ singer control
PCDJ-KJ has an ’On Deck’ convenient singer waitlist control. This is great for organizing the karaoke singers in a next on stage order. Enter the name of the singer, select the song they are going to sing and add them to the list. This is just another feature that displays an overall professional appearance on the PCDJ-KJ software.

Independent KJ Player with own output.

Key Control with Easy half step

Auto Fire to Player A and B

Beat Match Karaoke to Player A or B 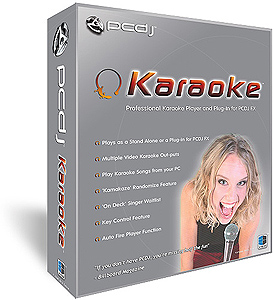